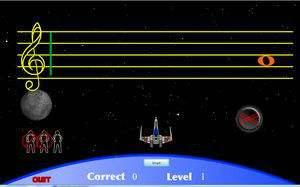 UPDATE 2022:  Staff Wars 2 is no longer available for Windows.  However there is now an iOS version called Staff Wars Live that is even better than the Windows version.  Their original Staff Wars is also available both on iOS and Android devices.