In the same vein as other music note ID training apps NinGenius goes the extra mile to make the tedious task of learning to read music a whole lot more fun.  But where other apps stop there, NinGenius goes even further by creating an incredibly useful tool that adds in the very important capability of being able to track student progress across an entire classroom.  Check out this review of NinGenius. 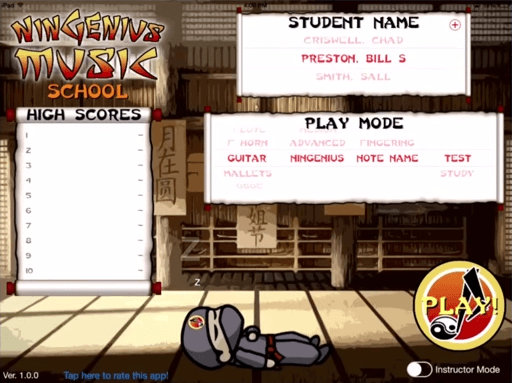 NinGenius uses a martial arts themed game to help students drill and practice the names of musical notes on the staff.  In it, a note appears on the screen and the student is presented with several options.  If they select the correct letter name then the character on the screen flies across and takes a hit at breaking a large board.  Each correct answer moves them farther along toward breaking it while wrong answers result in the character injuring themselves in several silly ways. At the end of each round the student is given a colored belt achievement based on how they did.

NinGenius comes in three different app versions.  The Student version of NinGenius is a basic, single instrument version that locks itself into a specific instrument the first time the app is started.  Once the app is used this instrument cannot be changed, so it is best used as a solo practice app on a home iPad or in a situation where the iPad is owned or used by only a single person.

The Studio version of the app brings in the ability to evaluate and record the scores of an entire classroom of students but only if they play the same instrument.  This version is intended for single instrument studios such as a clarinet class or a recorder class.  Once set the instrument cannot be changed.

The school version of NinGenius provides both the ability to evaluate and record a student’s progress over time but it also provides the ability to switch between instruments.  This would be the version most band directors would choose as you can enter the names of all of your band students and have them select and test on only the instrument that they are learning in class.

The Bottom Line- NinGenius Is Fun Learning In The Music Classroom

The Ningenius series of apps are all very well made and fun to play.  It turns a rather boring and repetitive task into something fun and very competitive as students push themselves to make it to the top of their individual instrument’s leader board (in the full school version).  Check out my video review of NinGenius or check the reviews of it over on iTunes and consider taking it for a spin in your own music classroom or with your aspiring musician at home.