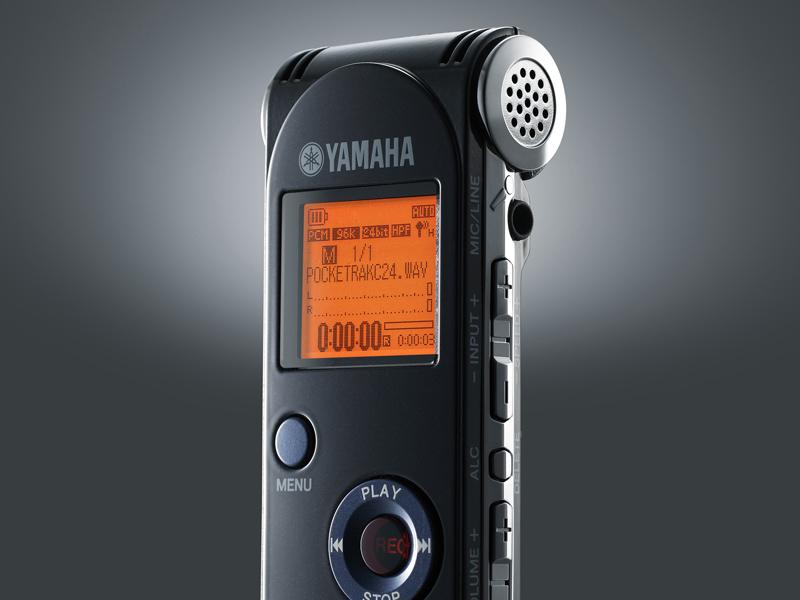 Several years ago when Yamaha first introduced the PockeTrak series of digital audio recorders I was both impressed and dissapointed.Â  The PockeTrak 2G was a very innovative product with lots of great features but at the same time it seemed rather cheaply made.Â  Fast forward to 2010 and Yamaha has learned well from their mistakes of models past.Â  The new Yamaha PockeTrak C24 is a grown up sibling to the 2G that fixes most of the complaints and adds new features to make it even more appealing to musicians and educators alike while still remaining an ultra-portable hand held digital audio recorder that is easy to use.

Features of the Yamaha PockeTrak C24

One of the first things that a user notices when they pick up the Yamaha PockeTrak C24 is that it feels and looks like a usable device.Â  While not perfect the layout and size of the buttons on the PockeTrak C24 make it easy to select and control all aspects of the recording mechanisms. The addition of a MicroSD card slot allows the user to expand the 2GB of built in internal memory.Â  Other improvements include a substantially beefed up stereo microphone that is recessed into the housing of the unit.Â  The audio recording quality far surpasses that of the older 2G, especially in the bass ranges.Â  Recording modes go up to 320Kbps MP3 as well as 96Khz 24 bit WAV.

Other nice features of the Yamaha PockeTrak C24 include a peak limiter that flashes the record button when the source volume is getting too loud.Â  When attached to a microphone stand using the included microphone clip this makes it incredibly handy to help the user monitor the recording levels and adjust as needed during a performance or recording session.Â  The unit also features a built in speaker as well as headphone and external microphone jacks.

Integrated Metronome and Tuner Add Versatility to the PockeTrak C24

Navigating the menus of the PockeTrak C24 is easy, and additional software features such as the ability to split recordings manually or automatically and the ability to add fade in and fade out effects to recordings is a nice touch.Â  Also built into the software is a chromatic tuner and metronome.Â  Both are fairly straightforward and easy to use with the only drawback being that the metronome functionality is rather limited in terms of meter selection.

Missing from the C24 is the rechargable Eneloop battery that in earlier models could be recharged via the USB connection.Â  Also missing from the package is a USB extension cable.Â  While the slide out USB connection of the C24 is a wonderful convenience, it still is a rather heavy unit to have sticking out from the front of a computer.Â  Users will probably benefit from investing in a short extension cable so that when downloading recordings the unit can be laid flat on a table rather than sticking out and potentially weakening the computer's USB port.

Overall the Yamaha PockeTrak C24 is a vast improvement over earlier designs and should be considered as a potential buy for anyone in the market for a small yet powerful stereo portable recording device.Â  While there are a few minor issues they are fully outweighed by the positive changes and features that Yamaha has incorporated into the product.

Share your own comment of how you would use this item in your classroom OR a comment about how you already use it in class or for personal use and be entered in a drawing to win your own!  Contest ends on December 24th, 2010!

The webmaster reserves the right to discard comments that do not add to this discussion in a proactive way.  In other words, if you stuff the ballot box with spam you won't win!
Winner will be chosen at random from all of the valid entries.