Up until now I have stayed away from audio recorders that bill themselves firstly as voice recorders and I have always focused on those intended for use in a music recording environment.  Well, having received more than a few requests and questions about the Olympus line of digital voice recorders I finally gave in and asked the company to send me their highest quality recorder to do a review on.  What they sent me was the Olympus LS-11, a stereo recorder with tons of storage space and decent sounding features.  So what did I find when I opened the box and took a look?  Read on to find out!

First Impressions of the Olympus LS-11 Linear PCM Recorder-
When I first test and review a recorder I do what any normal human being would do.  I pull it out and start playing with it without giving a second thought to reading the manual.  If I can figure the thing out pretty good on my own then that is a plus one for the unit.  In the case of the Olympus LS-11 digital voice recorder my first impression was that it was a bit over packaged as the unit itself is very small (3x6 inches).  What I discovered was that nearly half of the packaging is delegated to holding a REALLY big owners manual.  This, of course, has nothing to do with the usability of the product, but as first impressions go you will either think, â€œGee, that must be a really thourogh manual,â€ or ,â€Gee, what a waste of trees.â€

As for as actually using the unit at this first look stage I have to say I like the design and feel of the unit right up front.  It feels rugged in your hand, solidly built, but yet not so over constructed that it would not fit in a pocket or briefcase easily.  The buttons are all laid out nicely and are large enough for my big fingers to use them easily.  The unit has two switches on the side to turn on/off the microphone limiter and low cut filter, which will be interesting to test in my traditional real world classroom test environment this week.

Tons of Built In Memory on the LS-11
Other nice features that I notice right off the bat are things like a thumb mounted mic level adjustment and two inputs for line level or an external microphone.  My biggest good impression came from finding that the unit has eight gigs of internal memory without needing to use an add-on SD card.  Most of the other digital audio recorders that I have reviewed by companies like Zoom and Yamaha come with only 2 gigs of permanent memory.

In prepping for my review I always filter through the online sale sites and make notes of things that others either praise heavily or criticize publicly.  Several comments seem to point to people having issues with clicks or stuttering on long recordings so I will be sure to check that out this week and see if it is a problem with the unit or if it is a problem with the userâ€™s removable memory cards.

So, for now it is off to school I go with the Olympus LS-11 in my front pocket to see if it can stand up to the trials of recording my ensembles and other activities this week.  Weâ€™ll see what happens!

Full Review of the LS-11 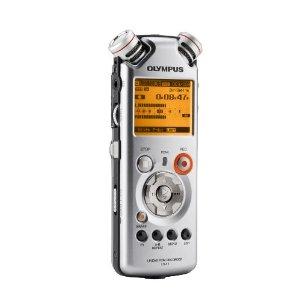 After using the Olympus LS-11 Digital Voice Recorder for several days I came to several basic conclusions.  First, the built in adjustment functions for controlling the microphone levels seem to do a pretty good job.  When recording a trumpet solo hardly any background noise was heard although once the trumpet stopped the amount of background noise shot up noticeably.  To fix the problem all I had to do was go in and set the recorder to manual mic control and then set it to an acceptable level.  That way when the music stopped there was no noticeable jump in noise.

Recording Features and Capabilities of the Olympus LS-11 Voice Recorder
One of the first things that I noticed on the recording side of things was that the LS-11 has a huge 8 gigs of internal memory.  All other digital audio recorders in its class that I have reviewed has 2 gigs built in, where with the Olympusâ€™ 8 gigs a user can record over three hours of music or conversations while still recording at the unitâ€™s highest WAV quality level.  The unit also provides the ability to save files in WMA format as well as the traditional WAV and MP3 formats.  While this is a nice addition not many people have the pressing need to share their recordings in WMA format and remember that although it will play back music saved in WMA it will not play back DRM encrypted WMA files.

Recording quality of the LS-11 was on par with most of the other digital audio recorders that I have reviewed in the recent past.  Having the volume and recording level scroll wheels was nice, especially when recording using the manual mic level mode.  You see, the only big issue I had with the unit was that when recording with automatic mic gain tuned on there was a very noticeable increase in background noise the instant that the sound source stopped for a moment.  This distracting problem was immediately fixed by putting the unit in manual mode and adjusting the mic level using the side mounted scroll wheel.

Other reviewers had criticized the Olympus LS-11 on the grounds that it occasionally produced audible clicking, especially on long recordings.  I tried to recreate this problem in several different ways, but was unable to do so, leading me to believe that the other reports where either using highly fragmented SD cards or fragmented internal memory storage.  On the fresh, newly formatted memory no such clicks were heard even while making a one hour long recording.

Playback Features of the Olympus LS-11
The LS-11 comes with two built in speakers that are poor and underpowered to say the least.  For simple voice playback in a quiet room they would be fine, but for reproducing stereo music they are not very loud and sound quite tinny with distortion issues at higher volume levels.

Other Features of the Olympus LS-11
Like most current recorders the Olympus LS-11 comes with automatic power off timer that can be set in the menu system along with other options for the back light and other features.  It can also store files in one of several different folders and can even divide long files into smaller parts when needed.

One interesting feature that was nice to have is the addition of a customizable function button.  This function button can be assigned to any of half a dozen different actions such as selecting the recording or playback modes.  Pressing the function button allows the user to skip right to the options for the assigned feature instead of having to wade through a bunch of menus.

Overall I was quite suprised with just how good the Olympus LS-11 performed in a music classroom.  While there are several things that I would like to see improved, for the money the LS-11 does the job and does it with a respectable level of audio accuracy.  Would I use it to record an ensemble for mastering a CD?  Probably not, but for day to day recording of rehearsals and events the Olympus LS-11 is worth the money.