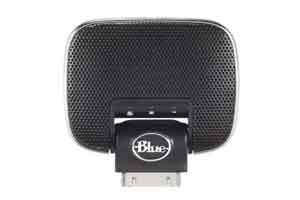 It's taken a long time to go from announcement to release, but Blue Microphones is now selling its newest, most advanced version of the popular Mikey series, the Mikey Digital. Was it worth the wait?  Read on to find out.

Anyone who has used an iPhone knows that the built in microphone is mediocre monophonic beast, intended primarily for talking on the phone.  It was never intended to be seen as a professional quality audio recording mic and those that have tried to use it in that way often come away feeling disappointed.  For those that want to have the audio quality of a dedicated digital audio recorder together with the convenience of their favorite Apple device the Mikey Digital may just be the perfect match.

Selling for around $99 the Mikey Digital is priced quite a bit below the retail cost of most of the more popular digital audio recorders on the market today.  The small, roughly pocketwatch sized Mikey comes with its own soft carrying pouch and fits easily into any small unused pocket in your backpack or briefcase.  The stereo microphone capsule inside is protected by a metal mesh and feels fairly sturdy while the hinge that is built into the Mikey allows it to rotate up in order to lay your phone or other device on a table top while still orienting the mics toward your sound source.

Over several days of testing I connected the Mikey Digital both to an iPhone 4 and an iPad 2 and found that the mic worked instantly with every audio app used as well as when recording video with the phone's camera.  On the iPhone the Fire 2 or GarageBand apps are excellent choices.  Most other recording apps work fine too, although the gain on some apps seemed arbitrarily low even with the Mikey set to its most sensitive setting.  In other words, you will have to play with it a little to find what works best for your individual recording situation. 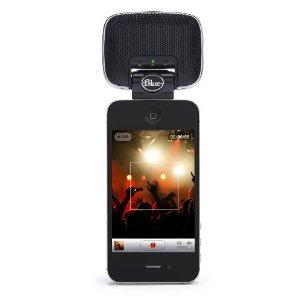 It should be noted though that some apps do not provide full stereo recording or record at the highest quality.  The built in Voice Recorder app that ships with the iPhone is one such app so if you want the best possible sound from your Mikey be sure to invest a couple of bucks in a decent recording app as well.

The Mikey Digital's design is pleasingly minimalistic.  Aside from an audio in port for connecting an external sound source and a USB port the only control on the device is a simple three position audio gain control.  On the high setting the microphone often overloaded and distorted the sound very easily, but this is not a bad thing necessarily as there are times that you may need to set it to this very high sensitivity level to record soft performances.  I am not a huge fan of automatic gain controls so in some ways it did leave me wanting for a manual adjustment dial of some kind the many many other digital audio recording devices have.

The previously mentioned ports on the Mikey Digital are also two of the best features.  The audio in port allows you to connect an external sound source via a standard stereo headphone plug.  In testing the jack worked flawlessly, taking input from several different sources ranging from guitar to an old tape player.  In all cases the audio recorded onto the device through the Mikey was very good quality.  Just be certain to adjust your volume levels at the instrument or device before trying to record.  Start at lower volume levels and work your way up for best results.

The mini USB port included on the Mikey is also a very handy feature.  Since the mic blocks access to the charging port on the iPhone or iPad you can use the mini USB port to provide external power for your phone when making very long recordings.  Be aware though, the port is not a data port.  You can't sync or transfer data using the USB port.

Another minor downside to the Mikey is compatibility.  The Digital does not work with all of the iPhone models (3 and 3S are not compatible), nor will it directly interface with the newly announced iPhone 5's Lightning connection.  No specific word as yet if the new Apple Lightning dock adaptor will allow the Mikey Digital to work with the iPhone 5 but a recent email sent to me by the Blue Microphone sales reps states that they believe it will be compatible and hope to test it as soon as the iPhone 5 is available to test with.

My general impression of the Blue Microphones Mikey Digital is that, given the right app, it is every bit as capable of producing high quality recordings whether in the field or in the performance hall.  When connected to the iPhone for use as a video recorder it is definitely on par with the recordings made by other products such as the Zoom Q3HD and others.  The convenience factor here is quite high, not having to burden yourself with another dedicated device to carry around.  Granted, you could think of the Mikey as a dedicated device but its small size and ease of use really make that a moot point.  Plus the added convenience of saving the audio to your iDevice and emailing or even editing it on that device is a big plus in my opinion.  Overall, the Mikey Digital is a solid, well designed external iPad/iPhone microphone that does its job quite well.