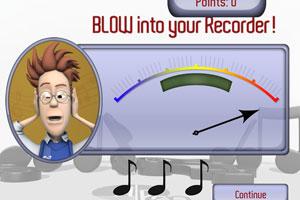 I've looked at quite a few Recorder training apps in the last few months.  All have promised to easily teach a person to play the recorder with a minimum of effort.  I've been sadly dissapointed with most of them but today I had the chance to look at the AtPlayMusic Recorder app.  For once I actually enjoyed playing through the app and I was impressed with how they progressed through the instruction.  Read on to find out what I liked and why this could spell the beginning of some very good future offerings from the same company.

AtPlayMusic Recorder is the product of a lot of work from a very talented group of individuals centered in and arround the Minnesota area.  With several prominent Minnesota Symphony Orchestra members on the ticket as well as some notable educational software industry gurus the app already has what many of the others don't, a strong pedagogical foundation to stand on.  The app teaches a student to play the recorder using a series of games connected together with animated 3D videos of a teacher and his student.  The videos are well done, and although the transitions seem a bit choppy at times they do not detract from what I would say is a very good overall progression through the basics of hand position, instrument parts, breathing and blowing, and note formation.  If I was going to ask a student to learn to play recorder solely by using an iPad app this is the only one I have tried so far that I believe could actually do it in a way that would have the best guarantee of success.

It should be noted that one of my cons above regarding the interactivity of the playalong games is probably a limitation of the iPad rather than of anything they could do with the software.  I have been told by other individuals who work for a certain big name interactive practice software company that getting the ipad to do real time analysis of notes as they are being played is not within the capabilities of the iPad hardware at this time.  In other words, the non-interactivity of those playalong games is a downer but there is nothing the company could probably do to make it work with the technology at this time.

Overall I think the AtPlayMusic Recorder app is definitely a great, solid step in the right direction for music pedagogy apps.  I look forward to seeing what the company does in the future and have heard that they eventually hope to move on to other instrument such as electric bass, woodwind, and brass instruments.  Kudos to them for trying and I wish them the best of luck.