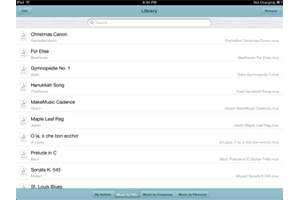 Recently MakeMusic released its new SongBook music reader app for the iPad.  The app has been expected for many months now, ever since it was first announced back in January of 2012.  Back then I wrote that I was looking forward to seeing the finale format music notation app, now known to be called SongBook, and recently was able to put it through its paces.  My first impression, good but still lacking in a few key areas. Read on to find out more.

The SongBook Music Reader for iPad

SongBook is a free iPad app that allows you to open, view, and play back music notation files stored in MakeMusic's proprietary Finale file format.  The SongBook app loads first to a list of files that are available for the program to open.  Out of the box, so to speak, it comes with a selection of songs already included to demonstrate the capabilities of the program.  Getting your own songs into the program is a little more complicated.  In order to load songs into the SongBook app you have to open iTunes, navigate to the apps tab, load the desired files, then sync. Honestly, I hate apps that force you to load data in this way.  I hate using iTunes on a PC, and having to do it this way is cumbersome, especially when other music notation readers like ForScore have things like DropBox support built in.  That's when I noticed a small line at the very bottom of one of the help files.

This small sentence at the bottom mentioed that you can indeed load songs using a sharing service like DropBox but it gives no help in that regard and I could not find anything in any of the menus or settings that allowed for it.  Finally I managed to figure it out after reading an article on Mark Well's technology blog that mentions that you have to using the Dropbox app on the iPad and then open the desired Finale music notation file from there.  When you try to open it from DropBox the iPad gives you the choice to open the file in SongBook.  I guess it works, but it is an extra step, and if other vendors can build DropBox support directly into the app then SongBook should too IMHO. 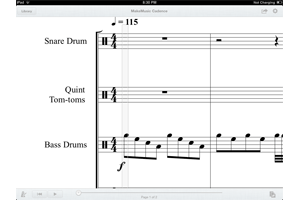 Once you get the music up and loaded in Finale's SongBook app I admit it is pretty easy to look at and to listen to.  Although the sampled sounds are pretty poor quality compared to the Garritan sound libraries that ship with Finale (the guitar sound is particularly dreadful) they are adequate for most people's needs.  A major plus in my opinion is the ability to select idividual parts from a single score for solo playback complete with the notation on screen.  The demo files provide several nice examples of this including a drum line cadence which I was particularly impressed with.  On the down side there does not seem to be any way to control the music playback other than through tempo.  For example in one help file I got caught in a neverending repeat loop.  The ability to skip repeats during playback or alter the behavior of other markings would be a nice addition to the program.

SongBook Good At What It Does But Lacking In Overall Features

As mentioned the visual playback capabilities of SongBook make it very attractive to users of Finale's music notation program, but the apparent lack of support for other formats like MusicXML, the inability to make annotations or markings on the score,  and the other issues mentioned above leave me wanting more.  Perhaps future releases of the app will build on some of these needs, and one can only guess that this is a first, small step toward MakeMusic eventually offering SmartMusic for iPad as well once the technological hurdles are overcome.