Band Achievement and Incentive System Based On "The President's Own" U.S. Marine Band 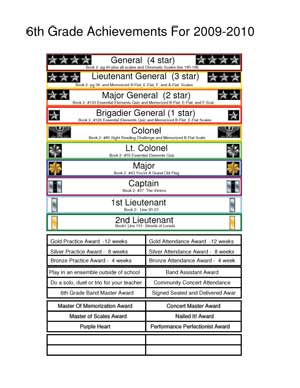 Many people have asked me to share my band achievement and incentive system that I mentioned in a blog post last year.  I had wanted to post a blank copy of the database that I use to keep track of all of my students, but I quickly discovered that my database engineering was so poor that no one other than me would probably be able to figure it out.  So, instead of posting the database I decided to try to do my best and share the basic achievement system and allow people to adapt it to their own needs.

Please note:  All of the documents mentioned in this article can be downloaded from the Band Achievement System folder in the MusicEdMagic Downloads Directory.
This band incentive system came from the realization that I was spending way too much money on trinkets and physical rewards to placate my 110 elementary band members.  I wanted to make something that could serve as an intrinsic award yet also give the students recognition for their achievements without being something that could potentially leave students discouraged if they try hard but never seem to achieve at the level of their peers.

Instead of basing the incentives on belt levels I wanted to do something that directly applied to the history of concert bands.  I decided to model it after the oldest concert band in the United States (and arguably one of the most prestigious) "The President's Own" U.S. Marine Band.  I used the history of the organization as a basis for the ranks in the achievement system.  5th graders start out as enlisted people, moving up through the various Marine Corps ranks starting with Private and moving through to Sergeant Major.  In 6th grade all students start out as Second Lieutenants regardless of how far they made it the previous year.  The thinking behind it was that 6th graders would be the officers of the elementary band, and thus be in some ways responsible for "training" the 5th graders and serving as good role models.Â  Having the seperation between the 5th and 6th grade ranks has the additional benefit of preventing lower achieving 6th grade students from potentially falling behind their 5th grade counterparts (at least in rank). 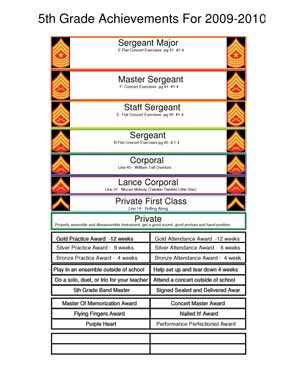 Passing ranks is done differently depending on whether it is the 5th or 6th grade group.  5th graders move quickly through the first five ranks with the first rank of Private only requiring that the student be able to correctly assemble the instrument and use proper hand position.  The ranks are passed by passing lines from the lesson book (or any music that you would wish to use as an assessment tool).  A student can move as quickly through the ranks as they want to, but they must be able to play the required lines with at least 90% accuracy as graded by the SmartMusic Studio software.  The reason for this is that it is actually quite a challenge for a beginner to get 90% or better on a single exercise without having to do a lot of practice on it.

If the student tries to skip ahead in the book just to do the next rank exercise he or she will find it very difficult to do it unless they have also worked on the interim material as well.  Another reason that I use SmartMusic Studio as the grading mechanism is that it is honest and impartial.  Teachers tend to be much more leniant than the computer is, and I have had students literally spend hours in front of the computer playing their lines until finally they managed to get it up to 90%.  Some may think that that is a little crazy, but in the end the student was incredibly proud of himself, and if I had just given in and said okay when he was scoring around 80% it would have demeaned the entire achievement system.  Make them work for it and you will be amazed at how hard they will try.

To try to add other ways to influence students to work hard I also added a medal system to the program as well.  While not all students will achieve the top ranks in the ranking system most can earn at least a few of the medals.  Medal awards are given for things like good practice habits, perfect attendance, and going above and beyond the requirements of the class in other ways.  These can be customized in any way that a teacher sees fit.

I hope that this incentive system will be of use.  There certainly has been a lot of requests for more information about it, so please feel free to take a look and tell me what you think.