Thirty Days With A SmartBoard And Why I Won't Go Back 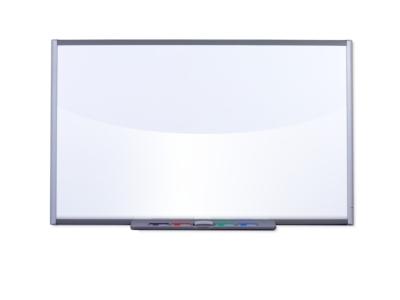 For a year now I have been singing the praises of using interactive whiteboards (IWB's) in classrooms.Â  I had the opportunity to use several different types of boards in various setups and my original conclusion was that in general it is not the board that is the most important part of the setup, it is the software that drives it.Â  I still feel like that is the most important thing to consider, but after receiving a SmartBoard for my classroom and using it for the last month I have to admit that the SmartBoard technology wins the race, especially when being used with younger students.

The main reason I am now convinced that the SmartBoard is probably the best choice for most educational installations is that the screen is touch sensitive to your finger or anything that touches it.Â  You drag items around the screen using the touch of your finger instead of having to use a stylus.Â  In comparison most of the other boards require the use of a stylus, which although the stylus does allow for a greater degree of accuracy (especially when doing things like high school math and other subjects) it also creates more headaches when trying to do things quickly during class.Â  In my opinion, after creating four weeks of lessons on the new board, I believe that the SmartBoard is superior in this regard.Â

I now teach all of my lessons with SmartMusic up and running on the board, quickly moving between songs with the swipe of my finger on the wall, making it so much easier to teach small groups or even large ensembles using any of a variety of tools.Â  The software itself seems to be easier to use than other products I have played with, and creating interactive lessons with true music notation is fast and relatively painless.Â  Allowing students to move notes around in a music notation program like Finale or Sibelius is a little less accurate at times, but in general it is still a much more immersive experience using the board compared to having a student operate a mouse on the desk in the corner.

While I still think that any classroom will benefit from the use of an IWB I don't think I could go back to using any other unit as effectively and efficiently as I now am able to with the SmartBoard.Â  My advice to you?Â  Write a grant, do a fundraiser, and get your tech committee on board with you and get this technology into your classroom.Â  Once you use it for a month you will wonder how you ever taught music (or any other subject) without it.
Add comment
JComments