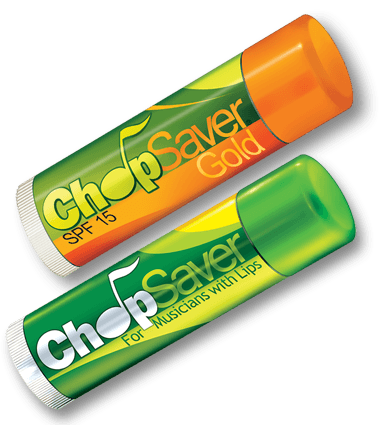 How often do you as a brass or woodwind musician overwork your lips so much that they tingle or hurt after a rehearsal or a gig?Â  All musicians are guilty of pushing their lips too far or too long, and while we all know we shouldn't do it sometimes we have no choice.Â  The show must go on, right?Â  While an athlete can throw on a bandage or an ice pack to help cool the swelling of overexertion musicians have been left with little in terms of useful remedies.Â  Musicians now also have a remedy that claims to help reduce injury and speed healing of overworked lip tissues but the big question is, does it work? Â

I was recently introduced to a special lip balm product called Chop Saver that claimed to be a specially formulated external lip balm specifically designed for use by musicians.Â  ChopSaver is a product that grew out of the desire trumpet player Dan Gosling had for something that would soothe and medicate his lips after playing all day.Â  The lip balm began as a kitchen chemistry project, mixing together various herbs and butters to create something that worked not only to protect the lips but also to help them heal and recover naturally overnight.

What Is ChopSaver?
In researching the formula he spoke with an herbalist, discovering the benefits of a special blend of herbs that when applied topically help to reduce swelling.Â  He combined thisÂ  with a mixture of shea and mango butter as well as other natural products.Â  Many people see the product as being a product only of interest to brass players, but in truth musicians from both sides of the fence can benefit from its use.Â  Since ChopSaver is not petroleum based it does not use the waxes and other binders that most commercial lip balms use making it much better for woodwind players as it does not gunk up the reeds with heavy waxy residues.Â  A second variety of Chop Savers also includes an SPF15 sunscreen to help prevent the lips from getting sunburned during long outdoor rehearsals.

Does ChopSaver Really Work?
ChopSaver is not just for trumpet players.Â  Although it is endorsed by musicians such as Arturo Sandoval and Sir James Galway it is also a useful product for almost any wind musician.Â  I tried it out for a week over the recent Christmas holidays just to see if it really did what it was reported to do.Â  Sure enough, after one rehearsal I pushed myself too hard and felt the tingling in my lips.Â  I used the ChopSavers that I had brought along in my trombone case and then went home for the day.Â  In my personal opinion it did seem to help out with my recovery time, and perhaps equally important it was a lot more comfortable and better tasting to apply than my old waxy tube of ChapStick.Â  Your results may vary, but when given the choice between this new product and other over the counter remedies ChopSaver seems to do the job as good or better than more popular brands of lip balm. It is available at many local music retailers as well as

online through stores such as Amazon.