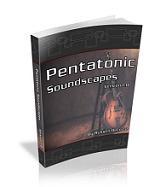 The pentatonic scale is one of the most frequently used and commonly taught scales on the guitar. Over the past fifty years countless books have been written in an attempt to teach the fingerings and practical applications of the major and minor pentatonic scale for guitar. Guitarist and educator Russell DeCorteâ€™s book Pentatonic Soundscapes Version 1.0 sets out to strike new ground in the realm of pentatonic scale pedagogy and application.

Chapter 1: In the Beginning

The first chapter of Pentatonic Soundscapes begins with an explanation of the five modes of the major pentatonic scale and how this scale relates to the minor pentatonic scale. Some readers may find that the textual explanation of this relationship is a little too short; DeCorte's intention is to provide the reader with a minimal amount reading work and have the student focus most of their attention on playing these concepts on their instruments. By choosing to place all of the material presented in this chapter into a practical, functional context, the reader can immediately jump into learning to play any and all of the given examples.

DeCorte also gives practice guidelines during the opening page of this chapter. He reminds the student that it will take focused practice to thoroughly learn to play all five of the pentatonic modes and that they need to learn these scales in all twelve keys. As well, DeCorte provides the student with the goal of being able to play all five modes of the scale in sixteenth notes at mm=60 before moving onto the next section of the book. While he does not mention it in the text, it is also assumed that the student should be able to perform the different pentatonic scales from memory before moving on to the next section of the book.

There is also a short paragraph that talks about how to use these different scales in an improvisatory manner. Since all of the scales are written in the key of C, to make it easy for the beginning student to read and learn them, DeCorte gives harmonic applications of these scales relative to that key. This section of the introduction is purposely short as DeCorte reminds the student that the important idea at this point is to physically learn to play each scale. Applying these scales to songs and chord progressions will be dealt with in more detail later on in this chapter and in subsequent chapters.

The rest of the first chapter deals with the concept of â€œpentatonic scale superimposition.â€ In general terms this section of the chapter outlines different ways in which each of the five pentatonic scales can be applied to different chords and progressions. DeCorte approaches this concept from two angles in the given examples.

In some of the examples DeCorte simply presents a given scale in ascending fashion to give the student the basic idea of the harmonic function of that scale in relationship to a certain chord. What makes this part of the chapter so effective is that in other examples DeCorte composes lines and phrases that can be used in a practical situation over these same chords.

These lines use patterns and sequences that are common to the jazz and fusion idioms and the diversity of rhythms used in each example will help the student learn to hear each scale and superimposition within a working line of music, not just a technical example.

DeCorte also gives examples from his own approach to improvising using these chords. The tune that he discusses is the familiar jazz standard Alone Together, where DeCorte presents different ways in which he would take these musical examples and apply them to this tune on the bandstand. Again, this section of the chapter is effective in its presentation of the pentatonic scales in a real-world situation.

The second chapter of the book deals with the application of common sequences and patterns to the major and minor pentatonic scales that were presented in the first chapter of the book. The chapter opens with an explanation of the nature of patterns and sequences, how they can be numbered, and then how this line of thought can be transferred to the guitar in a practical manner.

The first few examples in this chapter will be fairly easy for any advanced-beginner guitarist to learn and apply to their own playing. Though, after the second or third example even an intermediate player will have to work to fully get these examples under their fingers.