Journey Of A Thousand Miles: My Story- Autobiography of Lang Lang 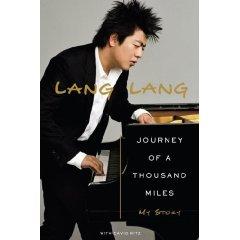 Until seeing Lang Lang on an NBC News program recently I had never heard of him. When I then saw him perform in the opening ceremonies of the 2008 Olympics I became mildly intrigued.  Now in reading his autobiography I have fallen in love with this modern musical prodigy and a poignant life story that in some ways mimicks those of classical masters such as Bach.  Journey Of A Thousand Miles: My Story tells the story of Lang Lang's growth as a musician, his obsessive attention to perfection, his tyrannical father who once encouraged him to commit suicide in the face of defeat, and his ultimate rise to world-wide fame.

Born into a family of two musicians Lang Lang seemed destined to be drawn into the same profession. In a society where families were permitted only one child, his parents sought to give their child the opportunities they had been denied as a result of China's Cultural Revolution in the late 1960's. The book chronicles Lang's life, practicing eight or more hours a day at age five, skipping Kindergarten entirely in order to have more practice time, and the many other life changing events that eventually brought him to America in the late 1990's to study with some of the great masters of American music, all the while hoping for the chance to be discovered.

This autobiography, cowritten by David Ritz, serves not only as a look into a child prodigy's life but also serves as an excellent primer on modern Chinese culture and thinking. Many passages discuss the concepts associated with the Chinese pursuit of excellence and perfection, that each person must have the goal to be Number One in his or her chosen pursuit and to be less than Number One is shameful.

The fluid writing and emotionally driven story will pull in any reader, especially those who have taken music as their own chosen profession.  The stories of Lang's childhood and adolesence will drive a reader to tears, crying at his many defeats while also reveling in his successes.   His twenty years of work and dedication finally led to the acceptance he had always prized most highly, the recognition and respect of his own Chinese people as he was asked toperform in concert just prior to the 2008 Olympic Games Opening Ceremonies as well as to play an integral part in the stunning opening ceremony itself .  Although not included as a part of this book, this event became a happy ending to what was by any stretch of the word a very difficult and stressful childhood. Still, as Lang Lang says in the closing sentence of this book, his journey is still only beginning.