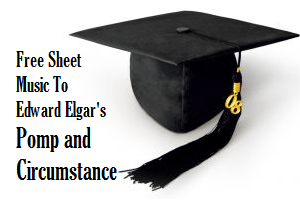 The Story of Elgar's Pomp and Circumstance

Note- Free sheet music for this song is found at the bottom of this page.  Simply scroll down to view it.

The name Edward Elgar is not usually mentioned among the great classical composers , in fact you may never have even heard of him, but his most famous work, Pomp and Circumstance, is one that all of America marches to each spring. Pomp and Circumstance has become the defacto standard for processional music at high school and collegiate graduation ceremonies throughout the country. Chances are that each of you as well as your children and grandchildren have (or will) march down the aisle on graduation day to the strains of this famous work. The Pomp and Circumstance Marches were first performed in 1901 in Liverpool, England with Elgar himself conducting.

The World Debut of Pomp and Circumstance:

The reaction to Elgar's marches, and especially the first one (Pomp and Circumstance), was immediate and profound. During one performance in London the marches, under the baton of conductor Henry Wood, the crowd simply refused to allow the concert to continue until the ensemble had performed the march three complete times. The enthusiasm for the piece continued in America a few years later, albeit for a slightly different reason that set the piece on the road to becoming an American graduation standard.

The Evolution of Pomp and Circumstance and Its Place In Ceremony:

In 1905 Elgar received an honorary Doctorate from Yale University. At the close of the ceremony Elgar's Pomp and Circumstance was performed as the recessional music. In the coming months Pomp was played at numerous ivy league and other prominent colleges as a part of their graduation ceremonies as well. From there the popularity of the work led to it becoming the expected march to be played at such occasions. In fact, outside of graduation ceremonies you will almost never hear it in American schools or professional performances.

The Popularity of Elgar's Music Continues to This Day:

The free sheet music listed below is the melody only and is arranged with beginners in mind.  The melody does move into the lower range of most instruments, but should be playable by any student in their first two years of instruction.