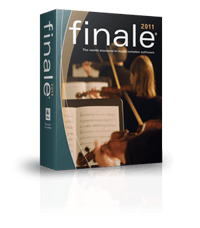 Finale 2011 brings with it a smattering of new and improved features, mostly focused on the areas of fonts, lyrics, and staff management.Â  After seeing the changes first hand we will try to answer the question, is it really worth it to upgrade to Finale 2011?

Among the more noticible improvements in Finale 2011 is the ability to hide unused staves automatically and have those same staves reappear when they next have notes.Â  For example, if the oboe had a sixteen measure rest the oboe part would disappear from the score for the systems that it is resting in.Â  In some cases this could be a useful feature, but I cannot think of any concert band scores I have ever read that drop parts when tacet.Â  In crowded scores or in certain situations though this could be nice to have so having the option is a point in the positive side of this review.Â  Hiding or revealing these staves is accessed through a simple right click contextual menu that works exactly as one would think it should.Â

Also new is a simple dialog box that allows the user to reorder staves as easily as it is to do so when using the document setup wizard.Â  Moving staves around is now a matter of clicking an up or down arrow.Â  This improvement alone is a nice change for those of us that tend to change our minds a lot when composing or arranging for multiple instruments. 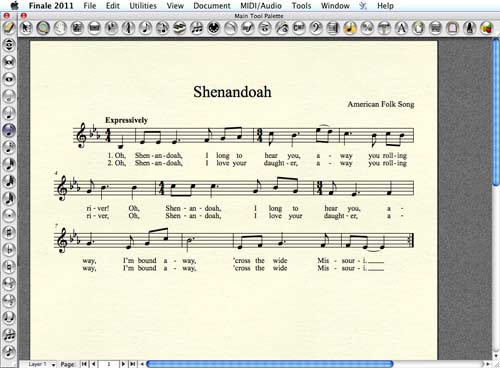 Improvements to Lyrics in Finale 2011

Adding lyrics to music has always been a pain regardless of what music notation software you use, so any improvements in lyric entry is appreciated.Â  For those that do a lot of work with lyrics the improvements to this area is actually quite impressive.Â  The ability to change font face, style, and size in the middle of a composition, even down to the individual word, is a big plus. Also a positive is the way that Finale can now automatically adds line numbers to lyric verses as well as offer a way to paste in lyrics into a window to then apply to a selected region of music.Â  Again, for the most part the new lyric tools are easy to use and fairly intuitive.

Finale has always been a great way to compose ensemble pieces for older musicians but until the last few updates has been lacking in tools that were of direct benefit to teachers of younger students. Over the past few revisions though MakeMusic has obviously made an effort to improve the general music appeal of the program, starting with the inclusion of hundreds of music education worksheets and continuing with the addition of other elementary friendly features such as boomwhacker note colors.Â  In this release improvements to percussion fonts and the addition of a mallet font give composers more possibilities when scoring for percussion ensembles.Â

One of the more exciting new additions (at least to this elementary band director/reviewer) is that in Finale 2011, the addition of the new AlphaNotes font should prove to be an even greater benefit to teachers, especially those in the lower elementary grades.Â  Regardless of what school of thought you follow on whether writing in note names is good or bad for memorization, it is hard to deny that having the ability to clearly include note letters inside of the note heads is a big plus in certain learning situations.Â  The AlphaNotes font goes even further than basic note names by also allowing the teacher to incorporate solfedge letters if desired.

That is the good side of things in regard to the AlphaNotes font, but in preparing this review I discovered that actually using it is a little more complicated than I believe it should be.Â Â Â  I was trying to figure out how to incorporate the new AlphaNotes font into a piece of music but in reading the manual I discovered that there are three different ways to accomplish the same task, none of which worked for me as I got lost in the user interface.

The overlying problem here perhaps is that as any robust, feature rich program such as Finale grows it often becomes more difficult to use.Â  There is only so much real estate available on a computer screen so many useful features have to be buried in nested menus and dialog boxes.Â  Such is the case it appears with switching note heads.Â  After nearly thirty minutes of trying to follow the directions in the manual I was still unable to get the new AlphaNotes to appear in my score.Â  I am sure that it works, but the documentation on this feature seems a bit unclear.

My big wish for the next version of Finale would be for the developers to not spend so much time adding new features and instead concentrate on making the features that are already in the product easier to use and understand.Â  While a professional composer might have enough time to learn and master all of the complicated options that Finale 2011 gives him, a busy elementary school or high school teacher is not going to want to spend hours of time trying to master tasks that seem as though they should be uncomplicated.Â  Returning again to the AlphaNotes example, my first intuition was to look in the Plug-Ins menu for something that would say "Apply Alpha Notes Font To Selected Notes" but instead I found myself fumbling through the manual and blindly clicking on menus trying to accomplish that task.Â  It seems logical that making things easier for more casual users would be a great and worthwhile investment in the development of the program over the long term.