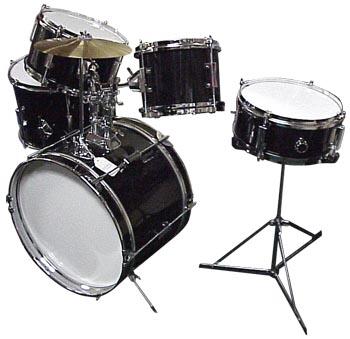 Percussion instruments are those we shake or strike to make a sound. Since prehistoric times they have been around as people made rhythms by clapping their hands or beating their chests. One of the earliest drums was made from hollowed tree trunks and covered with animal skins.

Boys are usuallyÂ drawn to the drum kit. However, percussion is more than a drum kit. The orchestral percussionist is expected to handle everything from bass drum to timpani or kettledrums, triangle, cymbals, glockenspiel, marimba and even piano. Playing a large number of percussion instruments demands a range of skills which can only be acquired over a period of time, and mastering snare drum basics is simply the foundation of study.

The orchestral percussionist is expected to be able to play everything that makes a sound by being struck or shaken, so anyone interested in playing in the percussion section of an orchestra needs to practice from triangle to vibraphone.

Drum Kit - is the basic drum kit. It includes a bass drum played with a foot pedal, a snare drum, two or three tom toms, a ride cymbal and a bi-hat (two cymbals operated by a floor pedal). Rock musicians have additional drums. Electronic kits date from the early 1970s, and recent developments include much more sophisticated features of music technology.

Djembe - is a drum played with the bare hands. It is said to have originated from West Africa. The drum\'s popularity outside Africa has grown since the end of the 20th century. They are now taught in schools where help is needed to teach basic music skills that can lead to further development for other instruments.

Steel Pans -Â originated from the Trinidad island in the West Indies. They developed as an inexpensive way of making music by inventing instruments from discarded oil drums. Eventually, they became commercially available in the 1940s, the only new chromatic instrument to be invented in the 20th century.

Tabla - is a popular percussion instrument used widely across all styles of North Indian music. The instrument consists of a pair of tuned, single-headed hand-played drums made in different sizes. Tabla is the name given to the higher pitched drum of the two.

Percussion is everywhere, from classical works for the orchestra, film soundtracks, folk and traditional ensembles, jazz music, military and marching bands, to pop and especially rock music. Orchestral percussion instruments include tubular bells, xylophone, glockenspiel (set of bells or play-bells), vibraphone. Some percussion instruments used in Latin and jazz music include gÃ¼iro, cuica and berimbao from South and Central America.

The kit player is responsible for keeping a band in time. Percussion players require a clear conviction of unity that enables them to come in on the right note at the right time. While an aptitude for this is shared with all instruments, wrong entries or timing are more noticeable on a loud percussion instrument than on the more quiet woodwinds.