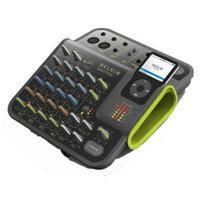 While searching through my weekly stack of stuff I came across a very intriguing new gadget that music educators are going to love getting a look at.  Named the TuneStudio and made by Belkin, it is now possible to record directly to your ipod while using the expensive, high quality microphones and other equipment that you already own.  Instead of recording to a CD or other media, the audio is dumped directly to your ipod's hard drive for you to take with you.

I can see some great applications for music educators with this new tool, imagine being able to record your rehearsals or concerts in high quality during class, then taking the ipod straight from the mixer dock and playing it in your car on the way home.  Or dump the audio straight onto your computer from the ipod to do some additional editing before sending it off to Disney or elsewhere for an audition.  There are already dozens of plug in microphones for your ipod, but this is the first I have seen that allows you to use your own equipment and microphones to make the mix.  Plus the thing looks totally cool too.  I am hoping to get in a review unit in the near future to give it a test drive.  I'll keep you up to date and let you know what the final verdict it on the new TuneStudio (F8Z109) from Belikin Electronics.