Recording Sound On Paper and Stone 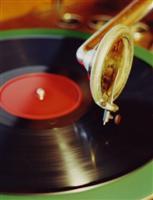 For over a hundred years school children have been taught that Thomas Edison was the first person to make a viable audio recording.   Well, get ready to do some revising of the history books...

{mosimage}For over a hundred years school children have been taught that Thomas Edison was the first person to make a viable audio recording.  Now a recording of a woman singing "Au Clair De La Lune" has been discovered in an older, paper format made on a device called a phonautogram.  A recording of this eerie voice from the past can be heard in a YouTube video shown below.

The science behind this is almost as interesting as the recording itself.  A phonautogram was not intended as a means to reproduce sound, only to record it visually much the same way that a seismograph records the vibrations of an earthquake.  A needle scribbles to a rotating drum of paper, visually capturing the sound.  {seyretpic id=60 align=left} At the point in time when the "recording" was made, there was no way to reproduce it aurally.  A news report in the New York Times says that recently, after being unearthed in an archive in Paris, researchers managed to use special software to recreate the haunting voice from 1860 singing one of the most well known childrens songs in the world.

Recordings On Paper, And In Stone?

Strange ways of recording sound visually are apparently more common than one might think.  While the Paris recording is the first known recording of an actual reproducable performance, there are some that believe Rosslyn Chapel in Rosslyn, England houses stone carvings that represent the different tones of a strange medieval motet.  Another YouTube video (linked below) shows the way that tones are represented in hundreds of tiny stone blocks found throughout the chapel.

People interested in these stories might want to take a closer look at the YouTube videos above and also take a peek into the Wax Cylinder Preservation Project at UC Santa Barbara.  Another great site for listening to old recordings is the Smithsonian Folkways Web Site.