Use of Wii Music In Classrooms Appears To Be Growing 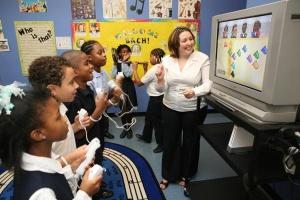 A few months ago I wrote a few articles (including one that ran in MENC Teaching Music Magazine) about the topic of using technology and software to teach educational concepts in music class. In particular I mentioned a little game called Wii Music that I have been personally fascinated by in how easily it seems to grab the attention of students of all elementary school ages. While it is not a purely educational game it is still very useful in music class. I and many others around the world have tried using it in some form or another with our young students and I have to say in most cases it has been a very good experience.

Nintendo recently released a press release about Wii Music and its growing incorporation into music education classrooms in the United States. The adoption of this game by teachers and by the MENC has been slow to blossom but appears to be growing steadily. I have pasted the Nintendo press release below. Feel free also to take a look at the other articles on this topic:

REDMOND, Wash.--(BUSINESS WIRE)-- Nintendoâ€™s new Wii Musicâ„¢ game is spreading from the family room to the classroom, thanks to newly formed collaborations with select schools and educators. To help inspire students and promote an active appreciation for music, Nintendo is working with teachers to incorporate Wiiâ„¢ consoles and Wii Music software into their lesson plans to offer teachers a unique tool for creativity and improvisation.

Nintendoâ€™s collaborators in this effort include MENC: The National Association for Music Education, which is recognized as the worldâ€™s largest arts education organization and as a teaching resource for all levels from preschool to graduate school. MENC will help teachers in 51 cities across the nation integrate Wii Music into their curricula, making use of the gameâ€™s 60-plus instruments and fun array of tutorial exercises in rhythm, tempo and song structure.

â€œThe goal of Wii Music is to inspire people of all ages to enjoy music,â€ said Cammie Dunaway, Nintendo of Americaâ€™s executive vice president of Sales & Marketing. â€œBy partnering with educators and bringing Wii Music into their classrooms, we hope to give students a memorable, hands-on experience that helps them discover their own creative voice.â€

The Wii consoleâ€™s motion-sensing controls allow Wii Music users at any experience level to step up and jam, whether playing solo or as part of a group. Using the wireless Wii Remoteâ„¢ and Nunchukâ„¢ controllers, players make simple, intuitive movements to strum a guitar, play a trumpet or bang a drum.

â€œAt any grade level, itâ€™s essential to provide students with the tools and encouragement they need to be creative,â€ said John J. Mahlmann, executive director of MENC. â€œWe look forward to collaborating with Nintendo to drive awareness and advocacy for music education through Wii Music.â€

Some teachers already have begun to incorporate Wii Music into their lesson plans.

â€œWii Music has brought a renewed excitement to music class for students from first grade to fifth, myself and even some of the classroom teachers,â€ said Helen A. Krofchick, a music teacher at Dobyâ€™s Mill Elementary School in Lugoff, S.C. â€œI love how many music standards can be covered in such a short time. Students also have to use language skills, spatial awareness and hand-eye coordination. We have a school very supportive of the arts and Wii Music has empowered our program even more. Any system that is educational and can add a love of music to childrenâ€™s lives should be in every classroom.â€

Other collaborating and partner organizations currently include San Franciscoâ€™s Blue Bear School of Music and New Yorkâ€™s Opus 118 Harlem School of Music. Teachers in these programs will use Wii Music to build studentsâ€™ familiarity with technology while bolstering their ability to create and improvise. Experts in the field of music say getting kids interested in music at an early age can help build a lifelong appreciation.

â€œThe joy of playing music is something that should be experienced by everyone, regardless of age, talent-level or experience,â€ said Joe Lamond, President & CEO of NAMM, the National Association of Music Merchants. â€œResearch shows that more than 82 percent of people who donâ€™t currently play a musical instrument wish they did. Wii Music can help address this by providing a positive introduction for millions of people who might not otherwise be inclined to try.â€

About Nintendo: The worldwide pioneer in the creation of interactive entertainment, Nintendo Co., Ltd., of Kyoto, Japan, manufactures and markets hardware and software for its Wiiâ„¢ and Nintendo DSâ„¢ systems. Since 1983, when it launched the Nintendo Entertainment Systemâ„¢, Nintendo has sold nearly 2.8 billion video games and more than 480 million hardware units globally, including the current-generation Wii and Nintendo DS, as well as the Game Boyâ„¢, Game Boy Advance, Super NESâ„¢, Nintendo 64â„¢ and Nintendo GameCubeâ„¢. It has also created industry icons that have become well-known, household names such as Marioâ„¢, Donkey Kongâ„¢, Metroidâ„¢, Zeldaâ„¢ and PokÃ©monâ„¢. A wholly owned subsidiary, Nintendo of America Inc., based in Redmond, Wash., serves as headquarters for Nintendoâ€™s operations in the Western Hemisphere. For more information about Nintendo, visit the companyâ€™s Web site at www.nintendo.com.