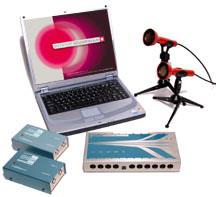 I've been a fan of the Beamz virtual musical instrument for quite a while now, and had mentioned how it was a perfect opportunity for students with special needs to create music both in a classroom environment and also as a recreational activity.Â  Now I have been exposed to another virtual instrument called the Soundbeam that works in much the same way only using ultrasound instead of laser beams to detect the movement of the person playing it.Â  It reminds me a lot of the old Theramin musical instrument that I used to play with as a kid at the local science center.Â  The closer you are to the device the higher the pitches will be while as you move away from the device the sounds go down.Â  The difference is that the Soundbeam sends MIDI data to a MIDI keyboard or other device to produce the sounds while the Theramin uses pitch modulation.Â