Lessons Learned- How NOT To Bring In A Guest Performer 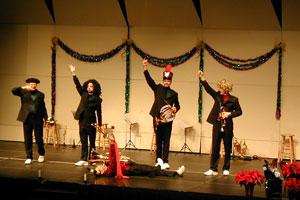 I was stumbling around Twitter today and happened across a new NPR video of the Canadian Brass playing Bach's Little Fugue in G Minor.  I was shocked to see that I didn't recognize any of the members of the group except of Chuck Daellenbach the tuba player.  I have a very (VERY) small personal history with the group so I was kind of sad to see Chuck as the only current member that I knew.  I know people retire and move on but come on, the Canadian Brass?  No matter what I will still have them stuck in my head the way they were back when the school I taught at stuck our necks out and hired them in for a Christmas concert back in the late 2003.

It was both one of the most memorable, scary, frustrating, and emotionally painful events of my teaching career.  Learn from my mistakes and read on... 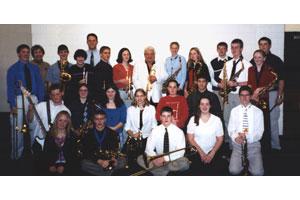 One day, sometime back in the 2001 the high school band booster club and I got a wild hare and decided to bring in a professional musician to do a concert in Dubque, Iowa.  It was a great idea, many schools do it, but we wanted to go bigger.  Well, it so happened that passing through the area was Maynard Ferguson and His Big Bop Nouveu Band.  We jumped at the chance and rented out a theater in Dubuque for the event.  It was awesome to say the least.  My students got to meet him, got their photos taken with him, and got to really see and feel what it was like to be a big name musician if only for a few hours.  It was inspiring and we made a lot of money thanks to very solid ticket sales.

Fast forward two years when the Boosters and I wanted to do something similar.  We found out that the Canadian Brass were coming through and to top it all off they would be in the area in December.  CHRISTMAS CONCERT! WITH THE BRASS!  AWESOME! 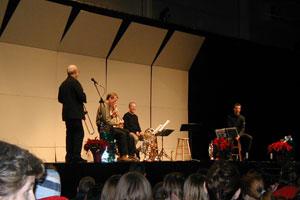 We jumped on the chance and started making plans.  Not only would the Brass be in town for a public evening concert but they would do a special educational concert that same day for area schools.  We packed in over 2000 students from area high schools and junior high band programs into the Five Flags Arena in Dubque on the afternoon of the concert and it was AWESOME!  One of my foreign exchange students from Japan was REALLY into it and even met with Chuck afterward for a little chat.

Now comes the gut wrenching, Oh crap, part of things.  We had signed a contract, both with the Brass and with the arena and had extended ourselves farther than we should have.  We had expected that things would be just as popular if not more so than back when we hosted Maynard.  Because of this we had decided to use the arena instead of the theater because it could seat more people.  We used Ticketmaster to sell the tickets.  We had 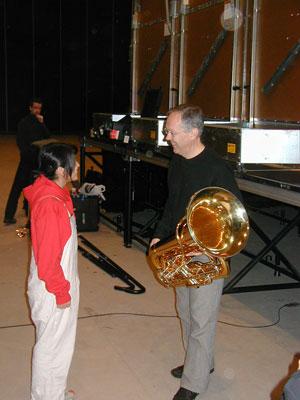 donated PSA's on the radio and TV playing at all hours.  After all, it was the Brass!  It was Christmas!  It COULDN'T FAIL!

Well, there is one thing that we did not think of back when we signed the contract.  The thing we did not think of was that in December everyone else is doing special concerts as well.  As December approached we realized we were competing with other big name acts like Lori Lyne and Sesame Street on Ice coming into the same arena both the week before and the week after our Brass concert.  With only so many dollars out there for people to spend we were in trouble.

On the night of the concert we had sold only half the seats.  The lack of people in the arena was embarassing to look at, especially knowing we would have had a full house next door in the theater, and during the student concert all I could do was pace in the back hallway thinking, we don't have enough money to pay these guys...

We had known for a few weeks that we were going to be in trouble, and had renegotiated with the arena a bit to cut back costs to the bare minimum.    When the Brass arrived I spoke with Chuck directly and told him in no uncertain terms that we were in big trouble.   They agreed to renegotiate a bit with us, but only because we were a school group and not a private company or person.  Between the two contracts and a small surge at the last minute in ticket sales we ended with about a $500 loss on the whole deal.  Our fundraiser turned out to be a major learning experience for both me and the boosters and that was the last fundraiser of that kind that we ever did.

Was a $500 loss worth it for the experience for my students and the community?  Heck yes, but now, ten years later almost I still don't think I could get up the guts to do something like that again.