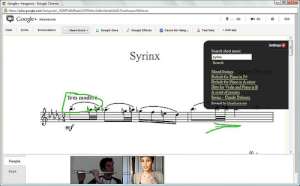 MuseScore may very well wind up having a major part in the future of music education.  A group of enthusiasts last year adapted the open source program to be able to listen to a performance and sync/scroll through the music notation on screen as it is being played.  This year at the Barcelona Music Hack Day they demonstrated an application where they connect MuseScore together with a Google+ Hangout to create a live, interactive practice session.  Why is this important?  Read on to find out!

Up until now most two way, interactive online music instruction has been done with the help of online conferencing products like Skype.  Unfortunately though for the majority of these Internet based musical mentors Skype is rather limiting when it comes to music instruction.  You can see the other person, you can talk and play to the other person, but sharing and displaying music is a little more one sided.  Even if the teacher has a copy of a music notation program chances are fair that the student does not.  Even when one or both parties has a music notation program it is fairly static due to the limitations of the screen sharing capabilities of Skype.

All of this may be changing quicker than you think.  A few weeks ago I posted about the 2011 MuseHack Day in Barcelona where a modification to MuseScore was demonstrated that allowed it to intelligently follow along a score while a performing played the notes on the piano.  At this year's conference in June MuseScore Co-Founder Nicolas Froment demonstrated an off-shoot of this improvedMuseScore techology being used together with a Google+ Hangout session.  In the demonstration he uses the "hack" to have Internet flute instructor Nina Perlove demonstrate a lesson where MuseScore is running on the teacher's computer but it can listen to the remote player and follow along, marking the notes on the screen as she plays.

A video of the MuseHack Day 2012 presentation is shown below:

The thing I did not realize when I wrote the post a few weeks ago about last year's hack is that the "hacker" is actually the Co-Founder and CTO of MuseScore itself, Nicolas Froment (@lasconic on Twitter).  To me this makes it seem much more likely that these modifications will one day find their way into the base code of MuseScore so that we do not have to figure out how to run the code ourselves.  The fork of MuseScore that includes the modifications is available on GitHub but I personally do not have the expertise to figure out how to run it.  If any of you do please invite me to a hangout with you as I would love to see this running in person.