Today I was walking through the giant sculptures and booths at the Des Moines Arts Festival when one of the pieces reminded me of some of the other incredible works of musical art I have seen and tweeted about over the last year.  I decided to put them all into this collection of posts and share them with those of you who might not have seen them before. To quote a phrase from the movie August Rush, "Music Is All Around Us," and no more so than in these incredible works of visual and musical artistry.  Read on to read and learn about each one.

The Coca-Cola Beatbox at the 2012 London Olympics

This one is still kind of TBA in that there are no photos or videos available that show the actual structure in place although it apparently is being built within sight of the Olympic stadium.  From artist's renderings it appears the building will be roughly three stories tall and will feature panes of semi transparent materials and pillows that play prerecorded sounds when you touch them.  One sketch of the roof of the structure shows what appears to be gymnastic vaulting boards that one can assume you jump on to make sounds.  The Beatbox is the creation of two architects named Pernilla and Asif. Remember though, this one is a temporary structure so if you happen to be in jolly old England for the Olympics be sure to stop by and check it out.

The duo's web site is surprisingly devoid of much information about the project but several London online magazines have done stories on it along with additional photographs of the concept. 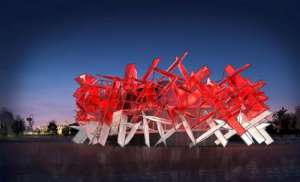 Peter Richards and George Gonzales built the Wave Organ at the Exploratorium in San Francisco back in 1986.  It uses over two dozen tubes of varying widths and lengths that dip down into the waters of the San Francisco Bay.  As the tides rise and fall the action of the waves create sounds and vibrations inside the tubes which filter up into a seating area made from old cemetary stonework and recycled city streets.  The Wave Organ was recently restored back in 2010 to preserve it for generations to come. The video below is a recent recording of a "solo" on the instrument courtesy of mother nature.  For a more in depth audio slide show of the creation of the organ check out the My New Wilderness movie on the Exploratorium's web site.

The Dithyrambalina was a shanty town of sorts created by a Brooklyn artist named Swoon.  The shacks in this work of art all were outfitted with various non-traditional instruments, All kinds of  electronic, percussive, and air driven instruments were worked into the structures and used by a group of musicians to create very interesting works of musical and visual art.  Over two dozen individuals work on the project which as you can see from the video and music is very Bohemian in nature.

In the late 90's musician William Close came up with the idea for what he calls his Earth Harp.  A giant stringed instrument that connects the strings from rigging points in the balcony down to a large 12ftx12ft resonating chamber on stage.  He has performed his Earth Harp at dozens of events and given live stage performances in many cities around the world since then and it even has a permanent installation in Las Vegas as a part of Cirque Du Soleil's "Ka" show.

Although he has been performing on this instrument for over ten years he is receiving a lot of extra attention lately due to his recent appearance on America's Got Talent on NBC.  He made it through the second round, so look for his upcoming nationally televised Earth Harp performances.

Being from Iowa this mammoth metal sculpture in Burnley, England reminds me more of a tornado than of a tree, and the uneartly music it creates is the result of the wind whistling through its hundreds of metal tubes is hauntingly beautiful.  The brainchild of architect and artist Tonkin Liu sits in the middle of a field greating visitors to the nearby golf course or who are out taking a leisurely country stroll.

Rosslyn Chapel sits in Edinburgh, Scotland and is the home of what many believe to be a secret acoustic code built into the masonry of the structure.  Around the inside of the chapel are mounted 213 stones, each with a very interesting design on it.  Scientists realized that these designs were not just decorative, they were musical. Using the science of cymatics, the researches realized that the designs depict different tones, and when played in succession they form what is now called the Rosslyn Motet.