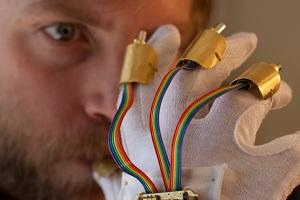 As a child I played in an imaginary marching band. Apparently that is also what inventor Scott Peterman did in his younger years. The difference between him and I? He actually took the idea and made it a reality. Using specially made electronic gloves you can play now play the trumpet, trombone, drums, or cymbals, all without actually touching a real instrument...

This whole imaginary marching band thing sounds kind of strange, but believe it or not it is a real, honest to goodness product that sprung from the mind of Scott Peterman. Have you ever heard of KickStarter? It's an entreprenourial web site that connects inventors and people with other bright ideas to donors. The donor can donate pretty much any amount of money from a few bucks to thousands, and the inventor provides incentives in varying degrees based on those donations. People have funded hundreds of different projects by using the service. Peterman used KickStarter to try to see if there was any interest in his marching band idea.  When he finally reached his goal last year his next step was to start building his band instruments!

Strike Up The (Imaginary) Band

So what exactly is the Imaginary Marching Band?  If you want to see them in action take a look at Peterman's selection of imaginary marching band videos that demonstrate the instruments and talk about their construction.  Essentially they are glove mounted MIDI controllers that transmit data to a software program like ProTools or Garageband. These little gadgets go far beyond simple toys. They actually work very similar to the way real instruments work. The trombone is especially interesting in that it uses reflected light to determine the distance of the player's slide hand and adjusts the pitch accordingly. Higher harmonics are achieved by blowing into the receiver (on the player's left thumb) with different velocities of air. The same basic thing applies to the other instruments as well although with pressure sensitive finger pads instead of the light sensor on the trombone.