Visualize The Music Theory and Chords Of Songs 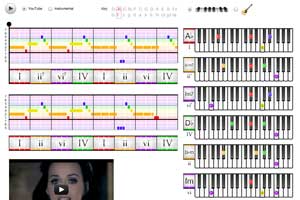 Music theory was tough for me. I was always a very visual learner so hearing chord progressions and analyzing them were difficult to grasp.  A new site I just discovered might have changed all that for me by tying auditory research together with visual representations of that research.  Dave Carlton has analyzed the chord progressions of over 1300 popular songs and laid them out in a way that is a great resource not only for music students but also for songwriters as well.

The cool thing about Carlton's database is that it uses some special javascript applets to display the key and chord progression information of a song in a nice visual manner.  For example, take a look at a song that got a lot of play on the radio a few months ago, Katy Perry's Firework.  You'll notice that not only does it show you the roman numeral chord progressions for the song but if you press the play button it will sync along with the audio to show you in real time how the song progresses.  You can also switch it over to just provide the instrumental MIDI style music instead of the vocals and can switch between piano and guitar fretboard views of the chords.  Under each song's chords is also provided a list of other songs that share the same or very similar chord structures.  Very cool!

The more I look at this the more I think it would have been WONDERFUL to have had access to something like this in college when I was struggling with these concepts in class.  They have a great page dedicated to the basics of music theory in song writing to help you understand chords and progressions even better. For visual learners this is a great music theory resource that you definitely need to take a look at.