Practice Your Rhythmic Skills With MyRhythm for iPad 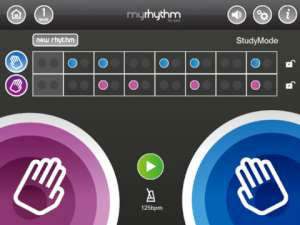 From the mind of Gregory Burk comes a new music app for the iPad called MyRhythm.  The app allows you to practice and test your skills at playing simple duple rhythms.  Is it something I would use in my music education classroom?  Read on to find out.

MyRhythm is essentially a rhythm tapping game set up in a sequence of eight duple measures. The beats are stacked on top of each other, with one line for the right hand and one line for the left.  The accuracy required to tap the rhythms correctly is quite strict, and I found that it was ideal for helping some of my percussion students to improve on keeping a strong, steady beat.  It is also nice for helping reinforce rhythms that are often hard for people to learn.  I would set it up with a series of off-beats to be played with the left hand for example and let the student practice the pattern over and over until they had learned to get the feel for it.  It would also work quite well with younger students in a general music class.

The app includes three different modes, a practice mode, a challenge mode which tests your rhythmic memory, and a creative mode where you can create your own rhythms.  All modes have four different difficulty levels and can be set at different tempos from 60-140bpm with various groove beats for accompaniment.  The tones of the two pads can also be changed to a number of different sounds if desired.

The app does leave me wanting a few things improved however.  First, it would be nice from a music education perspective if they were to have an option to show the notes in normal rhythmic notation with quarter notes and rests.  That alone would increase the value of the app in my classroom.  Second would be that they make an adjustment so that if you hit a pad at the wrong time it would mark it as such, perhaps with an empty circle outline or something to show you where you played incorrectly.  Right now you can literally just hit both pads in time with the beat and get a perfect score every time.

MyRhythm is a neat little rhythmic training game that could definitely be used in a variety of ways in a music education classroom.  Of course, it's also just a fun little game to play.  As mentioned you have to be very accurate in order to get the rhythms correct, so even experienced musicians might want to have a try at it.