Release Date Given For Noteflight on the iPad 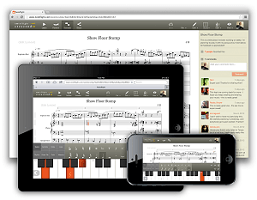 Noteflight for the iPad is finally here!  Almost...  The anxiously awaited release of Noteflight for iPad, Android, and other mobile devices is scheduled for January 24th.  The Noteflight team has been steadily working on converting their online music notation program into HTML5 format so that it can be used on pretty much any device that can connect to the Internet and display web pages.  Want to know more about the upcoming release?  Read on to find out!

I've been a big fan of Noteflight's online music notation system for a long time but have always wanted a version of the service that would run on the iPad.  That was always stifled by the fact that Apple refuses to allow Flash to run on it natively.  You could get around that limitation by using a special browser like Rover, but the results were always less than adequate.  Now, with the total rewrite of the program into HTML5 Noteflight will be available not just on the iPad but on Android, Windows Phone, and any other device that supports HTML5 web pages.

Noteflights plan is to continue with their freemium model, allowing basic music notation capabilities for free while allowing users to upgrade to more advanced tool sets and features for a small monthly subscription fee.  Teachers and music educators can also purchase classroom subscriptions for as little as $1 per student.  Subscriptions to the browser based version will also apply to the iPad app version and vise versa.

According to the Noteflight press release new features of the iPad app include the ability to enter notes using a virtual multi-touch on-screen piano keyboard as well as the continued ability for desktop computer users to use a mouse for more effective, rapid note entry.

The competition in the arena of online and tablet based music notation products is truly starting to take off.  The innovation in this area is going to be something to watch over the coming years, especially as Noteflight comes up to speed and new notation products from other companies like ThinkMusicEducation.com come online.  The idea of being able to use an iPad as a useful, integrated device in the music education classroom is growing more and more realistic everyday.