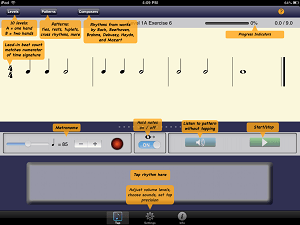 A few weeks ago I did a review of a rhythm training app for iPad called MyRhythm.  It was a decent drill and practice app that only had a few shortcomings, most notable the absence of real music notation.  Now enter a newly released app by a different developer named Rhythm Lab that fixes the notation issue and provides a much more music education oriented experience.  If you want a nice app based way to help drill your students on basic and advanced rhythms take a closer look and read on.

Rhythm Lab provides the user with a standard four bar phrase of rhythms in a variety of different time signatures.  The beginner levels start with single hand rhythms in  2/4 time and basic quarter/half rhythms with or without rests.  The difficulty gradually goes up from there moving into more advanced duple and triple meters, and even allowing some exercises with patterns where one hand is playing duple while the other plays triple.  As such the Rhythm Lab app offers a large amount of flexibility in what kinds of rhythms you can have your students practice, and of course, changing the tempo of the piece can add even more challenge to each line.

Each level has at least four exercises while some vary up to eight or more.  All of the levels have both one hand and two hand versions.  The student taps out the rhythms in time to the metronome pulse on one or two "pads" on the iPad screen.  The accuracy of the taps can be customized between three different levels. 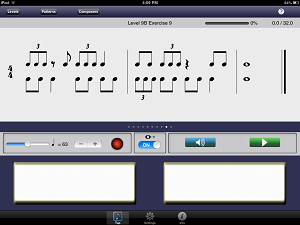 The only negatives I was able to find in using the app had to do with the  limited number of exercises for each level and that those exercises cannot be customized.  Still, the app has dozens of different patterns in it already.  It just would be nice to be able to make my own.  The other confusing part of the app was when I turned on the "hold notes" switch.  I understood what it was for, instead of tapping the start of each note you have to tap and hold to show duration.

This proved quite hard for me to get the hang of though, and I am not totally sure how I could use that one feature in my classroom as the only instrument it might be applicable to would be the piano.  If the developer was to link that feature to the microphone and allow a user to play and hold notes on an  instrument in the same way then I would jump on it in a heartbeat.