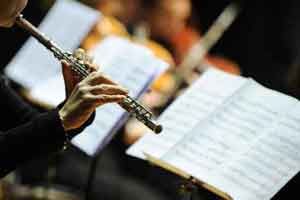 A very common problem for many beginning flutists is the issue of being able to get a good, solid tone on the head joint but then losing that tone when playing on the fully assembled flute. The frustration that accompanies this problem often makes the already challenging task of learning the initial fingerings even more difficult as the student often cannot tell whether it is their lip or their fingers that are the cause of the problem. To learn how to fix this tone quality issue we spoke to Emily Osby, music teacher at Stevens Point Area Public School District to learn some straight forward ways to help young flutists have a better chance at success.

The first step in helping a student get a good tone on the flute is to get them to use the proper embouchure alignment. Osby has the students say "emm" and then, with their lips closed, begin to blow a stream of air, allowing the air stream to part the lips with a nice small opening. As the student blows watch the lip plate for signs of condensation to show exactly where they are blowing and work to focus the stream into the center of the tone hole. Using a mirror to assist with this is highly recommended, as is allowing them to compare the appearance of their embouchure with that of other players either through photographs or in pairs.

If the student is able to get a good, consistent tone on the head joint but then loses that tone when playing on the assembled flute it usually has to do with unintentional changes caused by the student stretching to hold the instrument. "When young students first begin to stretch their arms and fingers to accommodate the flute the good alignment that they had on the short head joint gets messed up," says Osby. "Extending the arms off to the side and concentrating on hand position can cause the student to lose the centered embouchure and focused air stream they achieved on the head joint alone." To fix this problem Osby focuses on posture and hand position while once again using a mirror to provide a visual reference for the student.

Another issue that often contributes to poor tone quality on the flute is poor finger control and hand placement. Any time a student has problems getting a note to speak double check to make sure that the fingers are completely pressing down the keys. Even the slightest gap between the key and flute may cause the note to wash out and sound like an embouchure problem when it is really a fingering problem. Other common mistakes like a finger leaning on the trill keys or improperly aligned pads can also masquerade as embouchure issues. When in doubt clean off the head joint and try playing the instrument yourself to check.

Flute tone problems can be some of the more challenging issues to fix for many beginning musicians, but with a little patient observance and lots of guided practice these problems can quickly be solved.

An edited version of this article first appeared in the January 2012 issue of Teaching Music magazine in the Brass and Woodwinds Workshop section. A copy for personal or research use may be downloaded but no further use of this article is permitted without written permission from the National Association for Music Education.