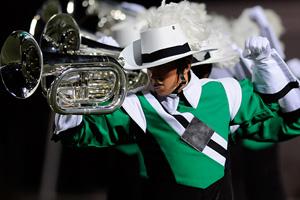 Anyone that has the chance to go to the theater to watch the annual DCI live broadcast of the semi-finals knows that the production quality of the video is just as impressive as the corps performances themselves. At any given time when a corps is on the field there are dozens of broadcast crew members running around, manning the cameras, and literally calling the shots of the show that you see. Yet we never get to see them or appreciate just how much work they do to make the show look and sound almost as good as it would be to be sitting in Lucas Oil Stadium watching it live.  Video included below so read on to see it!

Well, DCI recently released a full length video of the 2004 Cavaliers Finals performance taken from the 2004 National Championship DVD. It lets you see the performance, but it also lets you listen to Broadcast Producer Tom Blair and John Flower calling camera positions and other commands to the many different camera people scattered around the field. Everyone takes for granted how beautiful the show looks when shown on video but until you listen to these guys you never realize just how involved they are in making the visuals pop at just the right time. It's like they have the performance of each corps almost memorized. They even get into it a bit, you can hear them almost anticipating the big hits in the performance. Take a few minutes to watch (and listen) to this show and truly appreciate the complexity and hard work that it takes to make the show look as good on video as it does live and in person.