Is Marching Band A Sport? Pros, Cons, and a Reality Check

In recent years the question of whether or not marching band is a sport has been brought up time and time again for various reasons and by various groups.  On one side you have the YES crowd who says that marching band is competitive, physically demanding, and every bit as much a team event as any traditional sporting event.  On the other side of the coin are those who say no, that marching band is NOT a sport and it is a musical pursuit that happens to involve coordinated movements.  Both sides are right, but to make a final decision we need to look deeper into the facts.  Read on to find out what they are!

Is Marching Band A Sport?  What Criteria Can We Use To Make That Judgement?

I'm a teacher by trade so the first thing I have to turn to in this debate is the dictionary.  The definition of sport is "an activity involving physical exertion and skill in which an individual or team competes against another or others for entertainment."  If you use that definition as the basis for the whole "is marching band a sport" argument then we can break it down by those specific criteria: 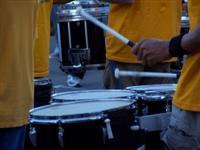 The answer to this one is based solely on where you live and what your marching band does during the season.  There are some marching bands that don't really do much during the year other than march in step down the street in a parade.  While it's a nice walk, except in extreme cases this isn't really an exercise in physical exertion.

On the other side of the coin though are marching bands that go beyond street marching and do organized drills on the football field.  They perform coordinated movements in multiple directions rather than in a straight forward line.  They vary their speed, the size of their steps, and depending on the tempo of the song it can get pretty intense.  At the same time they also perform music that is more complicated and lengthy than a standard parade performance which adds to the physical exertion as the player has to not only move but exert more power just to play the notes.  This type of activity already seems to be much more along the path toward requiring physical exertion, and in most cases this discussion would stop here.  However, for those who don't believe that marching band can be a physically exerting activity we should clarify things by refering to the literature and scientific research that has been done about it.

In 2013 a study by Vallee and Leander titled "The Effects of Participation in Marching Band on Physical Activity and Physical Fitness in College Aged Men and Women" used the same kinds of measurements that we use every day to evaluate professional athletes.  What happened?  While all members of the ensemble exerted themselves if the performer was a percussionist the exertion was even more pronounced.  As a result of these findings there are a large and growing number of school districts across the country that have begun to offer physical education equivalent credit to their marching band members during the marching band season.

As further visual evidence of the physical nature of competitive marching bands, in a video produced in 2005 as a part of the Drum Corps International World Championships (broadcast on ESPN2 no less), a band member is hooked up to a heart rate and breathing monitor and his vitals were recorded as he performed his part of the show.  At the end the exertion data of the performer was evaluated, surprising even the person doing the testing.  It showed that at some points during the show the performer's metabolic rate was up on par with that of a marathon runner and that his heart rate in particular stayed elevated for extended periods of time.

Based on this information there is little doubt that the first criteria of classifying Marching Band as a sport has been met, and that marching band does indeed require physical exertion.

This point requires little discussion as the bare minimum to be able to play music at the level of most high school aged marching bands requires at least four to five years of practice and training on the instrument alone.  Add to this the difficulty of performing coordinated movements around the field at the same time and you have little doubt that playing in a marching band does indeed require skill.

While perhaps not fully developed in some areas of the country in the vast majority of the United States marching band competitions are numerous and take place on almost every weekend throughout the fall marching season.  In semi-professional organizations such as the member groups of Drum Corps International, competitions will take place nearly every single night throughout the summer with bands travelling from city to city all across the country to participate.  In most cases the performances are judged and awards are given based on the musical performance and general effect of the show.  This is directly comparable to the weekly games that an organized football, baseball, or any other team might perform in. For an visual, video example of just how competitive and intense DCI competitions can get be sure to check out a series called Clash of The Corps

that is available to watch on Amazon Prime.

Additonal Facts Supporting That Marching Band Is A Sport

While not a part of the dictionary definition additional evidence that marching band is a sport include the fact that the majority of marching organizations such as Drum Corps International, Bands Of America, and other such groups have well defined and publicly accessable rules governing both the performance competitions and the behavior of the musical atheletes who participate in them.  Also to be considered is the fact that in most schools the rules for academic performance, drug or alcohol use, etc. that are often incorporated into a school's eligibility policies are also applied toward band members, prohibiting them from performing if their grades fall below a threshold or if they get in trouble with the law.

So Why Do Some People Say The Marching Band Is Not A Sport?

With all of these many validations to the fact that marching band is essentially a sport, why do many people still fervently disagree?  For many it may come down to a deeply ingrained personal bias and no facts or figures can make them change the way they perceive this issue.  Those that tend to think that playing in the band is not "cool" or that "the uniforms look stupid" will likely hold that frame of thought.

Many musicians however will also make the claim that marching band is not a sport, and it is my personal belief that a vast majority of those musicians who agree may have other more subtle and intrinsic motives for taking that stance.  Primary among these is the simple desire among many musicians to not allow themselves to be lumped in with athletes.  In some cases a music student may feel that they have been persecuted by "jocks" for pursuing their musical craft and this negative connotation in their minds of what athletes are comes back to taint their views.  For these people being called an athlete leaves a sour taste and goes against the self image that they have built for themselves as a professional.

Today, in most schools with active, competitive marching band programs, there is little doubt that marching band should be classified as a sport.  As mentioned though this varies from program to program and the individual decision should be based on both the physicality of the program and the educational and musical rigor to which it is held.  If the program meets those criteria then regardless of personal bias or emotions marching band should indeed be classified as a sport.