Drum Pants- A Band In Your Pocket 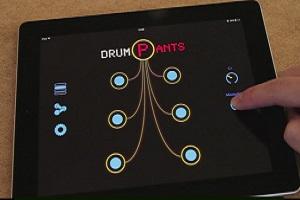 So who doesn't have a drummer or two in their bands that are constantly drumming on their legs, table, or anything they can in absense of a pair of sticks?  Here's a cool Kickstarter project (that is already funded) that is a perfect match for people that just can't stop playing.

Drum pants is an idea dreamed up by Tyler Freeman.  It consists of a set of pressure sensitive strips connected to an Arduino circuit board and programmed to reproduce any of 100 different sounds when you touch the various areas of the fabric strips.  You velcro the strips to your body either on top of or underneith your clothes, plug them into the controller, and output the sound through headphones or an optional external speaker.  Apparently they are also working on ways to connect this portable drum kit to your iOS device via Bluetooth so it can control MIDI apps wirelessly.  The best part is that since the Kickstarter project is already met their initial goal the drumpant kits are already being made.  Make a donation of $89 or more to the project to get one for yourself.  Would I buy one?  I don't know...  But my son in junior high is already asking for one. :)