Was Somebody Singing? The Extraterrestrial Music Education Advocacy Event Nobody Knew About 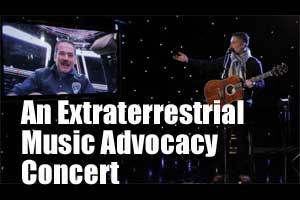 At some point in the past year you have probably heard about space station commander Chris Hadfield, the first Canadian to command the station and also apparently a very good guitar player and singer.  His cover of the song Space Oddity by David Bowie has already had over twelve million views on YouTube.  But did you know that back in February he did a music education event with the Barenaked Ladies music group of a song called Is Somebody Singing (I.S.S. for short)?  His space to earth performance of that song was broadcast in a way such as to allow bands and choirs all over the world to play along with it as a part of what some billed as the world's largest concert.  More importantly it was a very novel way to encourage and advocate for music education in the schools.  The bad thing though is that if you are like me, you totally missed it!

Not to worry, you can still listen, watch, and perform the piece with your own ensemble, if you know where to look.  Read on to find out more and download the music to I.S.S. for use with your own band.

Before I move on to the important details I have just one question...  Why the heck did nobody (other than those that participated) seem to know about this project?  When I searched for information about it I did not find any noted music education websites with links to it.  Not NAfME, not the Canadian Music Educator Association, in short, nobody was talking about it other than a few news outlets.  Second question, why is it so hard to find info about it other than of the video itself?

If you have a belated interest in this I finally tracked down some of the more important details and I hope that someone else can help me fill in any loose ends.  The video of the I.S.S. performance accompaniment track is pasted in below but the sheet music was a lot harder to track down.  A full listing of all of the available choral, concert band, and other arrangements (all free) for I.S.S. are found on the Canadian Broadcasting Companies Music Monday web site. For those that want to hear the audio versions of the arrangements for personal or educational purposes they are also available.

If you haven't seen it before posted below is the video of Hadfield, the Barenaked Ladies, and others performing the joint concert of the aptly named song I.S.S. (Is Somebody Singing).  Very cool and inspiring.  Nothing says you can't still use it even though the live event has passed us by!