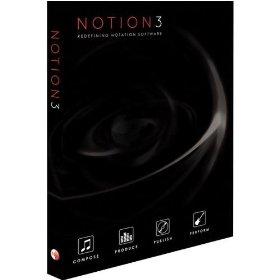 Having the opportunity to review a new piece of software is always fun, and even more so when it is one that until recently I had never even heard of.Â  We have all heard the names of other music notation programs, but as educators I would bet that few have heard of a product called Notion, at least until now.Â  The newest version of the Notion music notation software has just been released and while it may not sit on the high pedestal with names like Sibelius and Finale, they definitely need to move over and make some room for the new kid on the block.

As the story goes Notion 3 began as an music notation product that features sounds recorded by the London Symphony Orchestra.Â  As it has matured it has also evolved into a rehearsal and accompaniment product that has been used very successfully over the years by many different organizations to accompany live performances such as Broadway musicals and live concerts.Â  Notion 3's engraving abilities are on par with Sibelius and Finale, but still go a step farther to bring these live accompaniment features into the classroom.Â

At first glance several things stand out about Notion.Â  First of all the program is huge and is shipped on two DVD's in a very cool looking case.Â  It takes quite a while to install, even on a fast machine and has several plug in programs that must also be installed in order to get the full benefits of the package.Â  Each of these three products must also be activated over the Internet to avoid naggingly annoying copy protection measures, but the activation process is simple and fairly quick to complete.Â  Even though the program is huge, it does not feel like a bloated piece of software.Â  In particular it seems that Notion has benefited from its relatively newcomer status in that it is not beholden to legacy versions and old methods of saving files.Â  Instead of the common three letter file extensions that harken back to Windows 98 and before, Notion files are saved with the very descriptive ".notion" extension.Â  It also makes use of other modern technologies such as ReWire to working with audio and other programs an almost seamless event.

Writing and Performing Music With Notion 3


Once up and running the desktop is quite a departure from other programs.Â  First of all, the user interface and tool palette in Notion 3 is a far departure from the tool bars of other software programs and is truly a wonderful and well designed improvement over anything else that is out there.Â  Instead of clicking to open a window and then selecting a marking, tempo change, note duration, or articulation, the menus cascade as you hover over them, popping up all of the possible choices without additional clicks of the mouse.

When the user gets into the performance mode of the software is when the versatility of the Notion software really shines.Â  The tempo can be set to automatic, or it can be set to NTempo mode where individual beats or subdivisions of the beat can be selected as control points that are moved through by clicking keys on the keyboard at the tempo that the conductor desires.Â  Fermatas and caesuras act as they should, and playing through a song in this manner feels almost intuitive from a director's standpoint.Â  One strange little quirk that popped up while writing this review, make sure to turn off the performance mode before switching to other applications and leaving Notion in the background.Â  It appears that it listens to certain keys even when in the background as each time I hit the apostrophy key I heard the music advance another beat.Â

While in performance mode it is possible to jump forward, jump backward, and create instant vamps all with fairly simple keyboard controls. This makes it a wonderful tool for helping to fill in missing parts in a pit orchestra performance or even in a large ensemble setting.Â  Don't have any low brass in your band?Â  Put it into Notion and have the computer play along with you in total control of the performance or give the keyboard to a student and have them be in charge of this new part of the ensemble.Â  There may be purists out there who balk at this idea, but for small schools or schools with wonky instrumentations this product gives them a chance to feel what it is like to play with a full complement of musicians even when none are available.

Minor Problems and Inconsistencies With Notion 3

All this having been said, Notion is not without it's quirks.Â  At first every time I tried to print a score the program crashed on me.Â  Updating to the most recent release seems to have solved that issue, but there are other drawbacks, especially for someone that is converting over from other brands of music notation software.Â  For example, it seems to be the standard these days that the quarter note duration is selected with the #5 key on the number pad.Â  In Notion it is controlled by the "q" key, the eighth note with the "e" key, and so on.Â  This is a little distracting at first, and does not lend itself well to rapid transcription with a MIDI device.Â  Another minor annoyance was than when inputing lyrics if I made a mistake the backspace key does not let you go back and erase things once you have "spaced" or "dashed" on to the next syllable.Â  You have to use the mouse to go back and click the note that the mistake is attached to.

The Bottom Line:Â  To Buy Or Not To Buy?

Overall with my limited time behind the wheel of Notion 3 I have to say that I am very impressed with what I am seeing, and am entranced by the possibilities that this program could be used for when accompaning or assisting in classroom lessons.Â  The company is beginning to market Notion 3 toward the education sector quite heavily so look for it to become more and more up front and visible in the coming months.Â  At the fairly low price point associate with Notion 3 it also seems to lend itself well to amateur musicians and pop bands as it provides the best of both worlds (notation and performance).Â  If you have a chance to give it a try you owe it to yourself to do so.Â  At $250 it is less expensive then the full version of Finale 2010 or Sibelius (Amazon is selling Notion 3 for only $200), and a free demo version is said to be in the works for the near future.