Blue Microphones makes some of the most popular USB based podcasting and general recording microphones available on the market.  They do a great job of marrying high end components with a great sense of style that makes the mics not only great to record on but fun to record into as well.  Now Blue Microphones has come out with their latest iPod/iPad microphone, the Mikey Digital. The original Mikey came out several years ago and gained quite a following among those that wanted to use their portable devices as field recorders. Â Used together with or without the free BlueFiRe iOS app the Mikey Digital turns any iPad, iPod, or iPhone into a complete portable digital audio recorder capable of holding its own with commercial products by Zoom, Sony, and others.

The Mikey Digital is thinner than its predecessor but still maintains the ability to flip up to 230 degrees allowing you to lay down your phone while keeping the microphone elevated away from the hard reflective surface of the table.  The Mikey Digital also features an automatic gain adjustment on the mic itself which adjusts the sensitivity of the mic depending on the volume level of the audio source.

Where the Mikey Digital really shows some innovation though is that this new model includes both an 1/8th inch audio-in jack and a mini-USB connector.  The audio-in jack allows you to record from an external audio source.  However, you cannot record both from the built in microphone and the line-in source at the same time.  The mini-USB connection opens up the option for you to charge your iPhone via a standard Mini-USB charger and it can recharge the phone while the recording is being made. 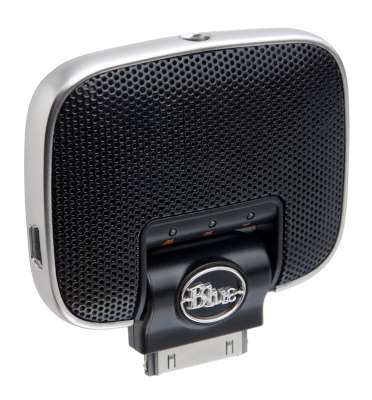 There are very few downsides to the Mikey Digital except for one, compatibility. The Mikey Digital is compatible only with 4th generation iPods, iPhone 4 and 4s, or any of the iPad models. Older iPods or iPhone 3G/3GS cannot use the Mikey Digital, but can benefit from the original Mikey for iPod model which is still available at many retailers.

The Mikey Digital will be coming out in early 2012 at many online and brick and mortar retailers. The Blue FiRe recording app is currently available on the Apple App Store. The late model Mikey for iPod is already available via Amazon.com and other online outlets.