Electric Marching On The Move In DCI 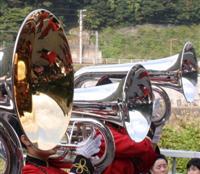 This month I was tasked with writing a column for MENC Teaching Music Magazine on the topic of how to incorporate electronic instruments into the marching band.  Some ensembles like the Western Carolina University Marching Band have also been doing incredible things with electronics for the decade (go read the article in the Oct. 2010 issue to get all the cool details).  But it seems like Drum Corps International really began to bring the idea to mainstream marching when it first began to allow amplification back in 2004.  Today electronic instruments and amplification are the norm at DCI performances, and if you saw any of this years top twelve then you know that some of them had really been pulling out all the electronic stops.

Last Thursday I made the trek to my local megaplex movie theater to watch the live broadcast of the DCI world championship quarter-finals.  I arrived late due to other obligations but after paying my reasonable $18 entry fee along with a grossly overpriced popcorn and pop combo I settled in to a mostly packed theater to watch the show.  Every corps I saw perform used some type of electronic instrument or amplification effect.  Some used it very little, but the top three corps really pulled out all the stops in terms of using electronic sounds to boost their musical performance and to improve the quality of their musical storytelling.  I am used to hearing tubas bringing up the low end of a band but the use of synthesized sub-bass tones really brought a new dimension to their performance.

It was obvious that not everyone was happy about it though.  One of the announcers mentioned that the Bluecoats had struggled a bit with balance issues when using the electronics, but from my seat in the theater at least it did not seem to be a big deal. I personally feel like the Bluecoats musical performance was the best one or at least the most enjoyable to watch and listen to.  While the Cavaliers and Blue Devils had awesome shows as well their shows seemed more visually distracting (*cough* MIRRORS! *cough*).  Of course my pick did not win, the Bluecoats came in third, but when only three tenths of a point separates them from the winner I think it leaves a lot to personal preference.

Getting back to my original point, the thing that I noticed most about the entire set of performances was that electronics are obviously set to stay in DCI.  Although there are a wide variety of opinions on whether this is a good or bad thing I tend to lean toward the view that using them, if done tastefully, can be a good thing for any performance.  This is especially true as popular music and the audienceâ€™s personal opinions of what sounds good continues to evolve.