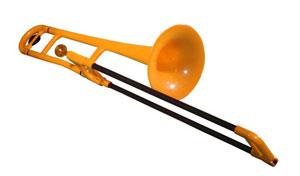 Okay, I know the physics says that you can make a brass instrument out of pretty much any resonating tube, but the idea of playing on a piece of PVC pipe just bugs me....  Today I stopped into my local music retailer to pay off a bill and sitting behind the counter was a brilliantly colored yellow trombone.  Walking around the side to get a better look I realized it wasn't just a fancy paint job, it really was made of PLASTIC!  Images of little plastic toy trumpets still wrapped up in a Christmas box breaking in my chubby little hands immediately filled my mind with fear and foreboding.

At the very least the purist in me screamed that there was just no way that an instrument like that could possibly sound good.  At the worst I began to harbor a fear of the coming zombie apocolypse for I had been told that this was one of the possible signs to look for before it started...

The lady behind the counter saw my perplexed look and deftly slid a freshly cleaned 12C across the counter to me followed by the horn.

With a sideways glance at her I accepted the horn expecting to feel a flimsy little trombone toy in my hands.  To my amazement it actually felt halfway normal to hold albeit a lot lighter and the hand brace thicker than my old Yamaha at home.  The sound it put out was acceptable, although I don't think there would be anyone that could agree that plastic sounds just as good as brass to get a warm characteristic sound.  The only thing that really bugged me was the slide action.  I was in a hurry so did not ask about whether or not it had been lubricated in any way.  With a little Slide-O-Mix it might have felt better but the friction of plastic against plastic kind of bugged me.

I was told that several high school music programs were starting to invest in these as alternatives for pep band and marching band performances where they want to safeguard their more expensive and easily dented metal instruments.  I guess I could see that, but the purist in me still wants to snap the thing in half and toss it in the trash bin.

I did a little extra research about these new horns and found a video of a pro playing on a red model of the instrument.  I guess they are made by a company aptly named "pbone" out of the UK.  Take a look below to see the horn in action.  I guess you can also pick up a pbone in several different colors on Amazon or at various retailers for around or under $200.  Not a bad price if you are needing something to use outdoors or in a venue where damage to your sacred Bach would put your job in peril.