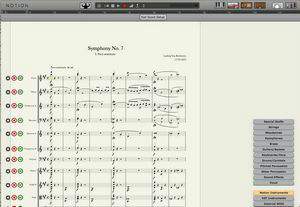 The Notion music notation software program has been one of my favorites for years.  They aren't as well known as Finale or Sibelius, but they have a strong and dedicated following. Now Notion has released Notion 4 with a slug of new features and a very attractive upgrade price.  Read on to find out more.

Version 3 of Notion has been reviewed here previously, and even made it into MusicEdMagic's High Tech Low Budget feature as one of the top picks for those wanting to find a new music notation program.  Their Notion iPad app is arguably the best music notation program available for that platform. On the PC and Mac existing users can upgrade Notion to version 4 for as little as $50, while the full version sells for only $99.  At this price point the program is ideal for anyone wanting to create sheet music in a clean, easy to use interface.

Notion's toolbar has always been one of the defining features of the program for this reviewer.  Back when I first looked at Notion 3 I was really impressed by how easy it made note entry tasks, and since that time more and more notation vendors have started to incorporate that same style of toolbar.  Notion continues this tradition with version 4 with a toolbar that puts every note, articulation, and marking in easy reach without having to dig through a bunch of drop down menus.  This added with the incredibly realistic sounds recorded by the London Symphony make Notion well worth the $99 price tag.