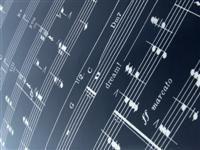 A few weeks ago a mysterious YouTube video surfaced showing a rather interesting iPad music notation app.  The thing that made it so intriguing was the ways the video showed people entering music into the app.  It showed instant transcription of hand drawn notes to rendered musical notation.  It also showed real time MIDI transcription using an external MIDI keyboard.  There was quite a buzz surrounding it but not many details.  Read on to watch the video and to find out about this incredible development in iPad based music notation and how it could one day be in your hands.

ThinkMusicEducation.com has a new iPad app in development that apparently intends to allow users to go to whole new levels in terms of easily creating music notation on the iPad.  On the 15th of January they officially launched their Kickstarter page to hopefully bring the project to fruition.  The video they released is apparently just a rough demo, showing the various features they are working to develop, but making an iPad app takes time and making a good iPad app takes money.  They are hoping to raise $150,000 through donations from individuals interested in the app and its potential uses.

The Kickstarter project ends on February 15th, so if you find the video below as interesting as I did go on over to the ThinkMusic project page and chip in a few bucks to help move the process along.  The project page also has another video with an explanation of the app from the primary developer.