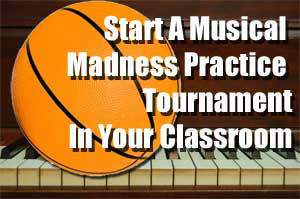 Need a fun, seasonally appropriate motivation tool to help keep your students practicing? Although it works best if you do this during March to coincide with March Madness there's no reason why you can't use it at any time of the year. Special thanks to Elaine Menke, 5th and 6th grade band director at North Polk Community School District for passing this idea along. She uses this tool each year with her students but it works just as well with pianists or almost any music studio setup.

Pretty much everyone knows about basketball's March Madness tournament.  In this fun practice incentive tool you use the tournament format to encourage your students to practice their instruments enough to pass off as many lines in their lesson books as possibe. To get started you have to default Blank Band Madness Bracket in Excel Format .  You randomly fill the first heat with your student's names and then post it for all to see. For added effect take the bracket to your local print shop and make a giant blow up poster of it to put up on the wall of your classroom.  A plain default  Band Madness Bracket PDF  is also available for download.

Each week during the tournament  students compete with each other by seeing who can pass the most lines from their lesson book in one lesson period. The student with the most lines passed wins that heat and moves into the next bracket while the loser moves into the second chance bracket to fight his or her way back into the winners circle. If a student misses a lesson due to being absent from school or some other excused reason then Menke gives the student a bye for that round and moves them forward to the next bracket.

If you use this with your students make sure they realize that the final winner of the tournament is not necessarily the person who wins the final head to head round.  Instead the final winner is the person in the class who passed the most lines in total.  Other specific rules that Menke uses include the requirement that all the lines to be played must be approved by her in advance and be circled in the book as being such.  They also can't go backward in the book to pass off easier songs.  Lastly, if they can play both lines of a duet they get credit for both.

During the first lesson of your tournament you tell your students about it and explain the rules. Then, each week you tally the lines and move the students to the next bracket and the lesson play test process is repeated, ultimately resulting in crowning your own local Music Madness champion after a certain number of rounds have been played. Menke goes on to provide a special prize of some kind to the winner.

If you are looking for a new, fun practice motivation idea for your music classes give this neat little March Madness game a try. For this and more great motivational ideas for your ensembles stop over at MusicEdMagic and see what's new.