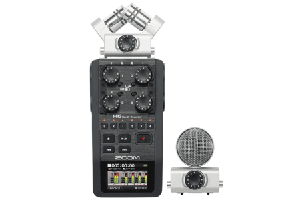 I've long been a fan of Zoom's handheld digital audio recording products.  My personal favorite, the H4n is currently one of the most popular products on the market.  Now Zoom has released the new H6 model with an impressive array of upgrades and flexibility of uses that may just wind up overthrowing their own top dog product.  Is the H6 worth the extra cash in return for the extra bells and whistles?  Read on to find out my take on this cool new digital audio product.

The first thing you will notice right off the bat is that Zoom has made significant changes to the design and layout of controls on the H6.  The LCD has been moved and in its place four rotary gain dials stand out front and center.  Why four dials you ask?  Well, because the Zoom H6 can record up to six channels at one time.  Yes, I said six.  The H6 can record up to six channels of 24 bit/ 96k audio but in order to get those last two channels you have to buy an accessory input capsule.

Unlike the old Zoom models the Zoom H6 sells for around $400 and has removable microphone capsules.  It ships with two capsules, one being an x/y pair and another being a mid-side.  If you want to invest another $130 you can buy a shotgun mic attachment or buy a dual XLR input (with independent gain dials) for another $70.   In a way this disappoints me a bit as one of the best features of the H4 in my opinion was the ability to plug in XLR mics directly into the recorder.  Having to buy an attachment is kind of a downer to me but knowing all the other cool stuff that the H6 has to offer softens the blow a bit.

My hope is that I will eventually be able to get my hands on one to do a proper review, but since I am rather poor at the moment you will have to make due with these excellent videos shown below.