GarageBand For iPad Goes FREE! But There's A Catch... 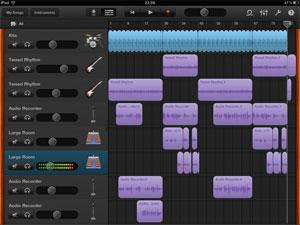 Recently Apple decided to make GarageBand a free app for the iPad.  While this may seem like an awesome deal don't get too happy about it until you take a closer look.  Apple, like so many other software companies, has adopted the freemium model for Garageband.  What once cost $5 for all the bells and whistles is now free, but there is a BIG catch.

Don't get me wrong, I like free, but freemium kinda stinks in most cases, especially when in-app purchases wind up costing more than the app would have in the first place (I'm looking at you Plants vs. Zombies 2!).  In GarageBand's case the app is now free but in order to get the full functionality of the app you are still going to have to pony up $4.99 as an in-app purchase to get the additional sounds, loops, and intelligent accompaniment features that the old app provided by default.  At least Apple didn't go the way of PopCap and others and try to charge outrageous amounts in order to enable the full functionality of the app.  All that was once available in the paid version can still be had for the same old price of $4.99.  However, in the PvZ case I mentioned PvZ 1 was $4.99 but to unlock all the features of PvZ 2 you' have to pay upwards of $30.00.  Stupid...  In my opinion of course.  Thank you Apple for not taking that end-around greedy money grab with GarageBand.

In terms of what the new GB app can do the new freemium version is basically identical to the old (except for the in app purchases) so there is no reason for music teachers and others not to download it and take it for a spin.  With or without the additional sounds GarageBand is an incredibly easy to use music creation tool, and one that hundreds of music teachers use in their classrooms every day to encourage creativity and assist with teaching basic musical concepts.   There are already over 70 GarageBand lesson plans available on one site I found and many other found across the web.  If you are as fascinated with the music education and creativity aspect of the iPad as I am then you owe it to yourself to download the newly free version of GarageBand and take it for a spin.  You might also want to take a look at a few sites that offer free music loops for use with GarageBand and other looping music editors that you might be able to use instead of the paid for versions found within the app.