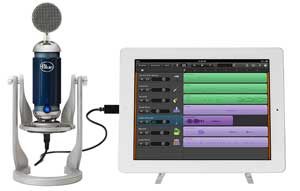 Up until now, like most musicians, I have had a bias toward using traditional XLR microphones when making recordings of myself or of my ensembles.  After taking the Blue Microphones Spark for a test drive this week though I am now rethinking that assumption, especially when doing direct to PC recording sessions.  The Spark has just as much clarity of sound as it does of design, and if you are in the market for a new solo mic for use with vocals, an instrument, or for podcasting it definitely warrants a closer look.  Read on to find out why.

Design and Features of the Blue Microphones Spark Digital

Blue Microphones is a company that obviously prides itself just as much on the visual aspects of its mics as well as their acoustic design.  From the moment you take the Spark out of the box you can feel the weight of its solid construction.  Fully assembled and mounted on the included desk stand with shock mount the Spark is heavier than one might expect for a USB powered microphone.  The shape of the body and microphone capsule mimic the lolipop shape of older vintage desktop microphones while providing access to volume and gain controls directly on the mic.

The monitor volume and mic gain are controlled by a dial on the front of the mic that changes color depending on whether it is controlling the mic gain (orange) or the headphone volume (blue).  Pushing the button briefly mutes the mic and this was the only part of the test I had some issues with.  I have a feeling that (as I was testing on a demo microphone) the previous user had been a little too harsh in pushing in the mute button and it had a tendency to stick.  Other than this issue though the mic controls performed as expected and were easy to set to the desired levels.

Blue Microphones provides two different Y-cables for use with the Spark, one with a USB connection and one with an Apple Lightning connection for use with the latest versions of the Apple iPhones and iPads.  Both cables also have a headphone jack that you can plug into for monitoring as you record.  I tested the Spark with both connection types and the mic was instantly recognized and used by both my PC and my iPhone 5 with no problems much the same as I have with other Blue Microphones iOS products like the Mikey Digital.   I also tried it in my classroom as an input for SmartMusic where it provided much better response and accuracy on the lower instruments like the tuba.

Audio Clarity and Sensitivity of the Blue Microphones Spark Digital

The Spark records in a standard cardioid recording pattern, picking up sound mainly from in front of the capsule.  As such it did a very good job of filtering out ambient sounds in the room as well as focusing the pickup mostly on the instrument I had pointed it at.  The recordings I made were clear and virtually without any background noise while providing a very accurate representation of the performer’s sound.   A Focus switch on the back of the Spark is supposed to subtly change the recording pickup to enhance the mid and high ranges of the sound.

The owners manual provides instructions for using the Spark with various kinds of instruments but be aware that to get the best angle on most instruments other than guitar or vocals you will need to purchase a different shock mount in order to attach the Spark to a traditional microphone stand.  You can also purchase an optional pop filter which attaches over the top of the capsule.

When it comes to USB microphones I have never been let down by Blue Microphone’s products and the Spark lives up to this expectation handily.  While it is obviously geared toward a desktop style of recording setup with the addition of the traditional shock mount it can just as easily be used in a monophonic instrumental setting as well.  At a retail price of around $200 it is a little pricey, but for those that want the best in recording clarity and accuracy in an easy to use USB Microphone the Spark should definitely be at the top of a very short list.