Sibelius 7.5 Will Change The Way You Teach Music 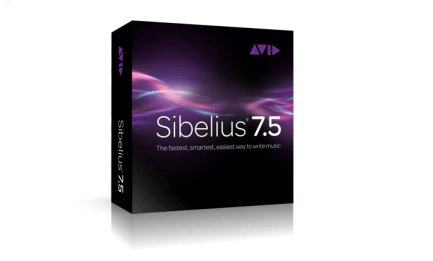 Sibelius recently released its new 7.5 version and with it comes some very cool updated tools and features.  If you teach music you owe it to yourself to take a look at this hands on review because it might seriously change the way you teach your classes.  Read on to find out more!

The New Sibelius Timeline Changes Everything

One of the first things a user of a previous (pre 7.5) version of Sibelius will notice is the timeline viewer which stretches across the bottom of the screen.  At a single glance the user can visually see all of the major changes that occur during the piece.  It shows the location of time signature, tempo, key, and dynamic changes, as well as giving a graphic representation of which instruments are actively playing at any given measure. Text blocks that are added to the score also show up in the timeline and can be used to denote the start of a piano solo or to mark the different sections of a sonata for example. 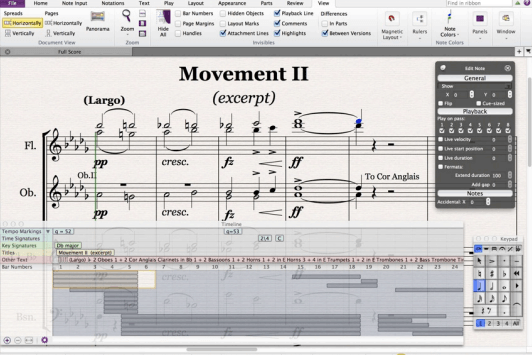 From a music education point of view this is an excellent addition that can be well used in a large ensemble/classroom setting.   While working on a jazz piece for example, clicking the rehearsal letter in the timeline jumps the score to the appropriate spot, but so to does clicking on the key changes, time signature changes, or even the repeat signs.  You get the ability to jump to anywhere in the entire piece of music in one convenient, easy to understand timeline of musical events.  Using this on a projection screen in front of your performing ensemble would be a great way to let your students see exactly what is happening in a specific section of music while also keeping in mind the bigger picture of the piece as a whole.

The Sibelius worksheet creator continues to be one of the most useful features of Sibelius for me in the band classroom.  I can quickly print from hundreds of ready made worksheets or I can create and customize my own.  While I think the process of finding and editing the worksheets could be made a bit easier I hold no qualms with the breadth and flexibility of the materials already provided within the program.  It is an excellent resource for music teachers to have access to.

Other notable features of Sibelius 7.5 as it pertains to music education include improved capabilities for sharing scores via email as well as recording them as video files for upload to YouTube and other media sites in full 1080p HD video.  You can also share the music you create in Sibelius by sharing them on Facebook and SoundCloud as well directly from within the Sibelius application.   If needed you can also export your scores to a variety of formats including MusicXML and Scorch which will allow you to embed your scores directly into an HTML based web page.

Give Sibelius Some (Hard Drive) Space

One of the big deals with Sibelius (and believe me, I mean literally BIG!) is the incredible sound library that comes with it.  For this review I didn’t have a physical DVD to install from so I wound up downloading the files.  The program itself isn’t that bad, about little over a gig of information.  The default MIDI sounds that come with the base install sound just like one would expect from a general MIDI sound bank.  In other words, they are pretty lame sounding.  If you want to have some realistic sounding playback options you need to install the full suite of high quality sounds.  Be prepared though, to install all of them gobbles over 36 gigabytes of storage space.  For most people buying a boxed set this won’t be an issue, but for me it took nearly a day over my school’s Internet connection to get it downloaded then another hour or so for it all to extract and install.

Once loaded though, the sounds were every bit as realistic as was promised.  You can always tell with most music notation programs that the playback is artificially generated, but when a score is properly set up and tweaked using the Espressivo 2.0 features the sound fonts that ship with Sibelius make the playback nearly indistinguishable from a live performance in certain styles.  The new Espressivo 2.0 feature gives you control over subtle changes in audio playback.  Stylistic phrasing for waltzes or swing pieces can be customized extensively either on a global or on an instrument specific basis.  For making truly realistic audio recordings of your scores SIbelius 7.5 can’t be beat.

The Bottom Line On Sibelius 7.5

From a music creation perspective there is no doubt that Sibelius 7.5 remains at the top of the list in terms of usability and customization.  With any high end product such as this though the learning curve can be a bit daunting but Sibelius has gone to great lengths to soften that somewhat.  The “ribbon” style interface that I ranted on back when 7.0 came out is now finally starting to grow on me, but with such a robust and complex product it is always going to be difficult to make it truly accessible to all users.

The new features, including the improved playback and export options however more than make up for a little learning curve and the crisp, detailed printouts of the final score are unmatched by any other competing product.  Lastly, as a music educator, the new timeline view in Sibelius almost makes the purchase of the product a no-brainer if you do any classroom score study work at all.  The timeline makes even complicated, frenetic scores more easily comprehended.  Visually and musically, Sibelius 7.5 is a masterpiece, plain and simple.