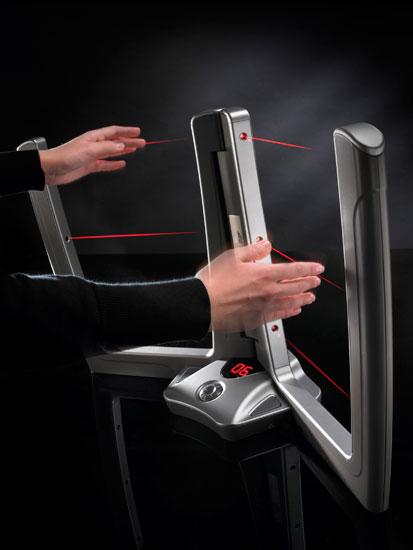 When you really think about it there have not been many advances in musical instruments in the last hundred years or so other than in electronic instruments.Â  The most recent acoustic instrument to become a standard part of the band is the saxophone (someone correct me if I am wrong on that one), but as we move forward with the digital revolution one has to wonder when a truely uniqueÂ  electronic musical instrument (other than those based on piano keyboards) will come to be accepted by the mass market.Â  It is to early to tell if the new Beamz Electronic Musical Instrument will become readily accepted by the upper levels of classical literature, but it is already being accepted as a legitimate musical instrument by some popular musicians and improvisational DJ's.Â  What exactly is the Beamz Electronic Musical Instrument though?Â  And can it be used in a contemporary music education situation?

What Is The Beamz Electronic Musical Instrument?
Imagine a large letter "W" sitting on your desk.Â  Each half of the W has three laser beams point toward the center, creating six trigger zones which can be activated by breaking the laser with your hand or another object.Â  Breaking the beam sends a signal to an attached Windows computer running the Beamz software and the software plays a tone or series of tones depending on how long the beam remains broken.Â  At first glance it seems like a toy but after a little practice and play one finds that it actually is an interesting way to compose unique musical compositions.Â  A player's performances can be saved as an audio file to be imported later into whatever audio editing software they choose.

Where Does The Beamz Electronic Musical Instrument Fit In Music Education?
First it is necessary to point out that the Beamz system comes in two forms.Â  The consumer version is $199 and includes the Beamz instrument, software with several dozen musical tracks, and five free downloads of current, popular musical tracks.Â  The consumer version by itself could be used in a music education classroom but it is not very flexible in terms of what it can do.Â  In order to be something that a music teacher might be able to use as an Orff type accompaniment instrument a teacher would need to invest instead in the $299 Beamz Studio version which has additional features built into the software to allow editing and creation of custom accompaniment tracks.Â  Luckily you can download a free trial of the Beamz software to see what the system can do even without the actual Beamz instrument.

With the Beamz Studio software the instrument can be set to provide almost any type of musical output that is desired, making it ideal for use with physically disabled students or as a fun, reward activity for students that do well in class.Â  Remember when everyone in music class wanted to play the cabasa or the vibraslap?Â  The student's desire to be allowed to play on the Beamz will be much greater and unlike traditional acoustic instruments the tones generated by the Beamz can be changed to anything that the teacher needs (if he/she is running the Studio version of the software).