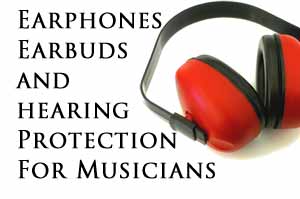 A musician's ears are the most important sensory organ they possess yet every day music students and their teachers irreparably damage that precious resource while participating in common everyday activities. We spoke with Mead Killion, Chief Technology Officer and founder of Entymotic Research and Joseph Pisano, Associate Chair of Fine Arts at Grove City College to dig into the realities of hearing loss by musicians and how we can use these tools effectively while still protecting our student's hearing as well as our own.

In a study completed in 2007 by Joseph Pisano of Grove City College, 42 band directors were tested for noise induced hearing loss. In that study 86% showed some degree of damage but says Pisano, "Because most musicians with hearing loss experience it gradually stretched over the years, many band directors may not notice they are having problems at all." (View the original research PDF on this hearing loss study). In a similar fashion Killion reports many of the same findings from non-scientific surveys of hundreds of visitors done by Killion at various music conferences across the country. Killion reports that he "has met only two band directors past the age of forty who do not admit to having some degree of hearing loss."

From these observations it should be acknowledged that hearing loss for musicians is not something that simply shows up one day out of the blue nor does it usually stem from a single event. It must be actively prevented throughout a musician's career. Unfortunately the noise levels found in performing arts classrooms are often elevated to dangerous levels. In addition, common everyday activities such as the improper use of headphones and earbuds can cause even greater damage. To address both issues we will be taking a look at tools that allow us to teach, listen, and learn without suffering the bane of noise induced hearing loss.

There is a great debate, even in audiological research circles, over which listening devices are safer, headphones or earbuds. Many people think of headphones as being safer but, as with many things, it is all a matter of perspective. Any listening device can cause hearing damage if not used within safe guidelines. From a practical standpoint though over the ear headphones have the benefit of being one size fits all and easy to keep track of. Their durability combined with their relatively cheap $15-$25 price tag make them attractive to budget conscious educators. Many schools simply leave them plugged into the computers at all times, and their size and appearance makes them less likely to "walk off" with an absent minded student. On the downside headphones are susceptible to hygienic issues such as the transmittal of head lice or skin diseases from student to student forcing many teachers to disinfect their headphones on a regular basis.

On the other side of the coin are earbuds. Some schools are moving toward a practice of having students bring their own earbuds from home or having them purchase a set for each student, labeling them, and then storing them in the lab between uses, removing the hygienic issues from the equation altogether. Earbud style headphones come in two basic varieties. Loose fitting earbuds can be found rather cheaply (usually under $20 a pair) but the cheaper ones often lack good frequency response and the one size fits all styling can be a problem for small students or those with ear lobes shaped outside the norm.

Lesser used earbud options include earbuds that seal into the ear canal and are sold by Etymotic and other companies. These specialty earbuds come with special flanges that seal off the ear canal, holding the earbud in place and restricting the infiltration of external noises. Often called noise isolating earbuds this type can provide incredibly accurate musical reproduction while reducing external distractions. Noise isolating earbuds such as Etymotic's ETY-Kids 5 sell for under $50 and have features that help maintain safe volume output levels.

How External Noise Affects The Perception of Sound

The issue of external noise is one that affects both headphones and loosely fitting earbuds equally and deserves a closer inspection of the facts. We are used to hearing stories of students damaging their hearing by using listening devices that are turned up too loud. To clarify this assumption however Killion points to a 2006 study by Fligor and Ives where 100 college students were surveyed and found that almost all of them chose safe listening levels as long as no external noise got into the ear. When background noise from other people talking, musicians practicing, noisy machinery, etc. mix together with what the person is trying to listen to many people turn up the volume to levels that can, with prolonged exposure, cause permanent hearing loss.

Because of this tendency to turn up the volume in noisy environments the logical solution for most people would be to reduce the ambient noise levels. For this reason the special noise isolating earbuds become a more logical choice if they are available and affordable for a given user. In a school lab environment this noise issue may not be quite as important, but when purchasing earbuds for personal or professional use it should bear strong consideration.

Hearing Protection For Use In The Music Classroom

As mentioned previously headphone or earbud use is not the only way a musician can damage their hearing. Even in the music classroom sound levels can grow to dangerous levels during ensemble rehearsals, especially when in the presence of directional brass or percussion instruments. Although it may seem strange to some the use of earplugs during rehearsals is growing in acceptance and in many cases may actually be recommended.

Many people are familiar with the foam earplug inserts that can be purchased over the counter at a variety of places. These work well for reducing the intensity of the sounds that get to the eardrum and are relatively inexpensive. You can purchase bulk packs of paired foam inserts for as little as $1 a pair. The obvious downside for anyone who has used them is that they also distort the frequencies of the sound that reaches the eardrum making them less than ideal for most music listening situations.

To address this problem some companies now sell special earplug inserts that block the damaging high intensity sounds to safe levels, but without overdoing it, allowing all but the softest sounds to be heard easily. This type of earplug does not distort the timbre of the sound being played. Although more expensive than simple foam inserts they are still very affordable and the benefits speak for themselves. Custom molded earplugs are available for professional musicians that perform in loud environments and can cost up to several hundred dollars for a pair. In contrast, earplugs such as Entymotic's ER-20 sell for around $13 a pair while other brands such as those being sold by Vic Firth, Hearos, and others are available in music stores and online for around $16.

Tools To Measure Noise Levels In Your Rehearsal Spaces

If you have fears that the volume levels in your classroom may be reaching dangerous levels there are easy ways to check. Killion recommends purchasing a simple sound meter, available from your local Radio Shack store, to measure the overall noise level during an active rehearsal. An alternative to the Radio Shack device for some people can be their smartphone. On the iPhone or iPad get an app called Decibel Meter ($1.99) or Decibel 10th (Free). On Android grab a free app called Noise Meter. Remember that these apps cannot accurately measure noise levels above 100 decibels but are adequate for classroom use.

Set the decibel meter up in the front of the rehearsal space with its microphone pointed toward the source of the sound. For more accuracy mount it in a way that it is at the same height your ears would be while conducting. To see what other members of your ensemble experience move the meter to different places around the room as well. Place it in front of the percussion section, near the saxes, etc. If the readings are continuously near or over 85 decibels the possibility of needing to use hearing protection treating your rehearsal space with acoustic tiles and other solutions should be considered.

When sound waves enter the ear they make tiny little hairlike cells vibrate and this in turn sends nerve impulses to the brain allowing us to hear. When the sound vibrations become too intense these hairlike cells begin to split and fray. If the sound is brief enough those cells may return to normal, but if they fray repeatedly they will die, and certain portions of the normal hearing frequencies can no longer be sensed by them. Unlike other injuries to our bodies these cells do not replace themselves so any hearing loss is permanent. For a more visual representation of this process take a look at the video "Hear For A Lifetime" on YouTube or at http://goo.gl/sFR7c.

Classroom Resources For Teaching Kids About Protecting Their Hearing

Listen To Your Buds
Dangerous Decibels
Hear For A Lifetime (video)

NOTE:  This article originally appeared in the April 2013 issue of NAfME's Teaching Music Magazine.  It is being reposted here by the original author.