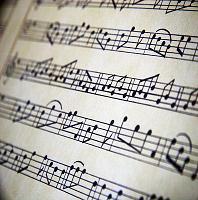 When Noteflight first appeared on the scene over a year ago (read the original Noteflight review) I was happy to welcome it with open arms.  At the time of its debut cloud computing was finally starting to take root in the form of online services such as Google Docs and other similar ventures.  Noteflight was the first truly usable online music notation program that I felt was a worthy replacement for bare bones, basic editing programs like Finale Notepad.  At the time it was a little rough, but the product has matured quite a bit and now the company has rolled out a new premium version of the software dubbed Crescendo which offers even more more storage space, commercially sampled sound fonts, and other requested features such as score templates and guitar tablature.

Still, why should a music teacher care about it if they are more comfortable with Sibelius, Finale, or Notation?  It turns out there is a significant reason, especially if the teacher is using the product in a large group classroom setting.

The new premium version of Noteflight adds many new features such as dozens of high quality commercial sounds, an increase to 250 the amount of scores that one user can have in their save file, and the addition of more ready made templates that can include guitar tablature and other notation variations.  The sharing features of Noteflight also received a boost in Crescendo, allowing the user to share a score with an individual instead of having to make it publicly accessible to everyone on the Internet.

The nice thing is that for those schools and teachers that subscribe to the Noteflight Learning Edition of the software all of these features are available as well, making this version of the software every bit as useful to teachers as the now non-free Finale Notepad.  The thing that sweetens the deal is the integration with the Haiku Learning Management System, an online portal where teachers can create  and receive completed assignments with students in a local or distance education classroom.  For those of you not familiar with Haiku, consider that what Haiku LMS provides to Noteflight Learning Edition is  similar to what Impact provides for SmartMusic users.  The Haiku system simplifies grading and classroom management tasks and makes for a more robust learning experience over the long run.

The Future of Noteflight

In an interview with Joe Berkovitz, CEO of Noteflight I asked him where he saw the product going in the future and was he really sure that Adobe Flash (which powers the online Noteflight music notation software) was able to take him there.  The response to that question was an unqualified yes, stating that Flash is not going to get in the way of innovation in the Noteflight music system.  While he acknowledges that Apple's denial of Flash support puts a damper on easily porting to an iPad application he says that the company is fully committed to taking Noteflight into the mobile arena on tablets and other devices that have not even appeared on the market yet.  At the same time he touts the fact that Noteflight is not investment driven, they instead pursue a very organic model of growth, leaving nothing to stop them from one day achieving feature parity with other major music notation systems.

The Bottom Line- Is Noteflight Worth It For The Music Educator?

With the new Crescendo feature set, the Noteflight Learning Edition is even more appealing to music teachers than it was a year ago.  The idea of having a constantly up to date music notation software program that needs no user user initiated maintenance coupled with the power of the Haiku Learning Management System is really an interesting possibility.  One that I would have to guess most K-12 institutions would probably discover that they prefer over burdening the IT department with upgrades and fixing things when something gets corrupted.

For the price of $300 a year for over 200 students, the Noteflight Learning Edition makes good financial sense if the more advanced features and MIDI note entry are not an issue.  While the lack of MIDI support is a downer perhaps one day with the help of technologies such as InternetMIDI or other programs Noteflight will be able to overcome that hurdle as well. In any case, the simplicity and convenience of creating and viewing student assignments through Haiku LMS with the help of Noteflight Learning Edition is well worth exploring.