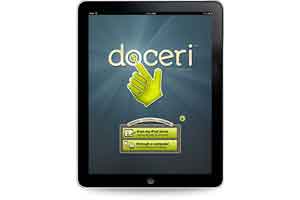 As the use of the iPad in classrooms has grown so too have the number of apps available that allow you to control a desktop computer remotely.  They do okay, but none to this point seem to have the ease of use and feature set that the Doceri app provides.  In its early versions Doceri was just a remote desktop app similar to Splashtop and others.  The new version however, released in summer of 2012, is much more robust and offers a host of new features that make it the ideal classroom presentation app for the iPad.  Read on to find out more.

Most remote desktop apps are little more than glorified wireless mice.  You touch the screen of your iPad and the mouse on your desktop computer moves as well.  Doceri has this feature, and does it very well, but where it diverges from the rest of the pack are the things it can do which others can't.

The new version of Doceri features a slide creation utility similar to PowerPoint.  Students or teachers can use the app to create static slide presentations and navigate through them one page at a time.  However, you can also choose to play back the presentation in timeline mode, meaning that the presentation is saved as an indexed video file and when played back you can see the individual letters being written or drawings being created.

When using the Doceri iPad app together with the desktop app you can take control of the computer, using your finger to control the mouse on the screen.  In this way it is very much like the other previously mentioned remote desktop apps but this is where the similarity stops.  When sharing a presentation via the iPad the classroom viewers, watching on a video projector hooked up to the desktop computer, are able to view the presentation while the person holding the iPad has at their disposal a full set of drawing and annotation tools that are visible only to them.  In this mode the iPad can be used essentially as a portable, wireless electronic whiteboard that can be passed around for students to interact with instead of having to come up to the front of the room.

The convenience and opportunities that this provides to a class cannot be understated.  If you already have an iPad you can quickly have a fully functioning interactive whiteboard to use with the whole class without having to spend an extra $1000 on a dedicated whiteboard solution from Smart or Promethean.  It should be noted that the Doceri Desktop app costs $30 for a license that removes the "unlicensed" popup that appears from time to time.  Still, $30 is much, much less than $1000 and in many ways the app provides even more functionality than most traditional IWBs.

The only significant downside observed when using Doceri in a classroom or other application is that its usability is highly dependent on the network to which it connects.  Doceri requires Wi-Fi connectivity and must be on the same network as the desktop computer or AirPlay enabled device to which it connects.  If that network is slow or firewalled you may have difficulty getting Doceri to work in certain situations.  For example, in using Doceri at a conference the network was very slow and overloaded due to all the attendees.  Doceri had problems connecting and maintaining a smooth, fast refresh rate between the iPad and the desktop computer.  To avoid this problem you can often plug the computer into the network using a wired connection or by creating a local adhoc Wi-Fi network using your computer's built in wireless capabilities.

It should be noted however that unlike many other screen sharing apps such as AirServer, Splashtop, and others Doceri is the only one that has worked with every network I have connected to.  Check with your IT department if you have issues with connecting as many school and business firewalls may block access to the ports that Doceri uses to communicate with the desktop PC or AirPlay device.

With these connectivity issues aside Doceri and Doceri Desktop are hands down the most useful and full featured iPad screen sharing and remote control apps I have had the opportunity to test.  If you are in the market for this kind of screen sharing app Doceri is definitely the first one to try and most likely, to stay with.