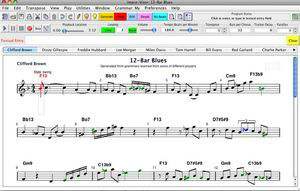 The brain child of Bob Kellar of Harvey Mudd College, Impro-Visor is a useful jazz accompaniment and improvisation training aid that can challenge anyone from the barest beginner to the advanced jazz artist. Using a setup similar to that of Band-In-A-Box, Impro-Visor can help you train your improvisational talents, and it will do it all for free.

Impro-Visor Is A Free, Robust Alternative To Band-In-A-Box

At first look Impro-Visor looks like almost any music notation program but immediately you discover that it is much more specialized and complex. Luckily an excellent, lengthy tutorial shows what all of the various control and features do and gets you up to speed fairly quickly for most experienced jazz musicians. The included sample files are an excellent place to start playing with Impro-Visor and provide you with dozens of different styles and solos to choose from.

Making Your Own Lead Sheets

Once you are ready to get started creating your own lead sheets notes can be entered with the mouse, by typing the notes in in text mode, or with a MIDI keyboard while chords are entered above the notes by typing them into a text box in the controls area of the screen. Entering chords into the lead sheet is as simple as typing them in separating the measures with commas, for example [Bb,F,Bb] would provide three simple measures, the first would play a Bb chord, the second F, and so on.

Under the chords the user can enter in their own solo material in standard music notation. Note entry is a little strange to those more familiar with the point click and drag method used by the popular music notation programs but you quickly become acclimated to it and can then speed through creating your solo without much difficulty. The wonderful thing about Impro-Visor in this regard is that for younger students it automatically color codes the notes as you enter them to let you know how they will fit within the designated chord. The notes will appear in the score as black if the tone is found in the chord, green if it is complimentary, blue if it is an approach tone, and red if it is none of the above and potentially should be avoided. The program also allows you to save individual licks from a piece to your "vocabulary" where they can be pasted in as desired.

Another interesting ability of Impro-Visor is that it includes a lick generator. Simply enter in your chords, press a button, and have the computer dream up an improvised solo for you to customize or play as is. As you play along with the lead sheet you can loop sections repeatedly to allow you to "woodshed" difficult licks.

Impro-Visro runs on both Mac and PC and is a free, GPL licensed software program. There is also an Impro-Visor users group that shares additional lead sheets and other files for use with the program.

On the downside there is a bit of a learning curve associated with using Impro-Visor in that some of the commonly used keyboard shortcuts are not followed. For example undo is usually control-z but in Impro-Visor it is just z by itself. Moving notes up and down in most music notation programs is achieved by using the arrow keys but in Impro-Visor you use the d, e and other keys. These things aside Impro-Visor is an incredibly detailed and robust piece of software that is provided free of charge. You can't beat that. Give Impro-Visor a try in your classroom and see what you think.