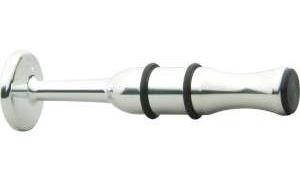 Do you have a trumpet or trombone player that can’t play high notes?  Maybe they can’t get a good solid tone because of lack of strength in their facial muscles?  Are they frustrated?  Read on to find out how I solved this problem for many of my beginning band students using a cool little practice device called a P.E.T.E.

Have you ever had a beginning trumpet, trombone, or baritone player that despite repeated instruction could never seem to get their embouchure strong enough to play anything above the lower partials?  Or when they did it was still badly out of tune because they didn’t have the strength to pull it off?  For example, with my 130+  beginners each year I always have at least one or two trumpets who can’t play above a low D or a trombonist who can’t play above a middle of the staff E-flat.  Their lower open notes suffer as well because they simply are not creating an effective embouchure that is strong enough to buzz the needed frequency.  Even after trying every trick and demonstration that I knew of some of the kids would still be unable to do it and eventually either switch or they would drop out from frustration.

Buidling Beginning Brass Embouchure The Right Way With The P.E.T.E.

I now may have a new solution to their problems, and my initial use of this cool little device has helped at least two of my students turn things around.  That little device is known as the P.E.T.E (Personal Embouchure Training Exerciser).  This year I was lucky enough to attend the Midwest Band and Orchestra Clinic and walked past a booth with a display of these little metal P.E.T.E. things.  I was familiar with BERP’s (Brass Embouchure Resistance Piece) which I have used a lot with my students during lessons but I had never heard of a P.E.T.E before.  They were tiny and I couldn’t for the life of me figure out what they heck they were supposed to do.   Soon I was swept up in a discussion between the booth staff and a trumpet player from the US Marine Band.  This professional trumpet player was swearing up and down that the P.E.T.E was the greatest thing since sliced bread, but I was still left with the question of what the heck was it?

I came to find out the P.E.T.E. is essentially a barbell for your lip muscles in a realistic way.  In the past I’d occasionally have students do the pencil trick in class, placing a pencil between their lips up against their teeth and then holding it there with their lips to help them get a feel for what their muscles were doing when they played.  This was often a last resort for me though as it is awkward and is not really a good analog for the way the muscles and lips work together.  I was anxious to find a better way.

Terry Warburton himself was the gentleman working the booth that day and he explained that when we buzz on a trumpet or trombone mouthpiece our muscles work in the inward direction to keep the vibrations under control.  The P.E.T.E. gives us a way to strengthen and work those muscles in a much more efficient and effective way than simply buzzing alone does.  You can see some demo videos over at the Warburton USA website or check out the one with Terry himself below.   In essence, the P.E.T.E is a 1 inch disc attached to a thin stem at its center.  The disc is placed against your teeth and your embouchure is formed around the stem.  You then gently pull out on the stem while keeping your embouchure firm so that it does not pull the disc through your lips.  Doing this for 30-45 seconds in a session is intended to help you strengthen the muscles and allow you to over a period of time play higher and with better endurance.  Coming from my particular student’s problems I wanted to find out if I could use it to teach these beginners how to strengthen their muscles enough to just get a proper balanced buzz when my other attempts had come up short.

Fast forward to the first week back at school after winter break.  I tried the P.E.T.E. with four students, two trumpets and two baritone players.  All had similar issues with a very weak muscle tone and the inability to hit anything above the lowest of notes but they did not want to try switching to a lower instrument.  We did the P.E.T.E. exercises during the first lesson back after break and in three of the four cases it immediately made an improvement. Suddenly all of the stuff I had been saying to them for months started to click.

For the first time since starting the trombone two of them hit their concert F and one of them was able to hit their high concert B-flat.  The same results were seen in the trumpet players as well. It wasn’t the greatest tone quality, but at least now they were finally getting the feel for what I had been trying to tell them for the last four months.

Repetition is Key To Success With The P.E.T.E.

We repeated the exercises over the next two lessons and I cannot begin to say how happy I am with this simple little piece of metal.  At around $39 for the plastic P.E.T.E. or silver plated models they are too expensive for me to ask all my beginners to buy one, but I am definitely going to incorporate their use in my lessons from very early on next year when I have a student that is struggling with how to use their mouth muscles correctly to form a brass embouchure.  I see that they now also have versions of the P.E.T.E for use by woodwind musicians as well.  Might be interesting to see how they help a sagging clarinet or sax bring their tone up to pitch.

In retrospect however I do have a couple of suggestions for any band director who is considering using the P.E.T.E. as a teaching tool as I did.  First, go with the silver or gold plated models.  In order to use these with more than one student they have to be thoroughly cleaned, and the plastic model is more difficult in my opinion to ensure that it is completely sanitary.  Plus the silver clad metal model is only $5 more so go for the more durable of the two.

Secondly it is important that the student be the one to pull on the stem rather than the teacher.  Since it isn’t in your mouth it is very easy to apply too much pressure and force the student to produce a malformed embouchure in an attempt to keep it in.  Demonstrate once, gently, then have them do the pulling after that.

Lastly, although you may see results in a single lesson session it is important to do it repeatedly over several sessions until they remember things on their own and are able to play reliably.  After that you can switch to using the P.E.T.E. as a way to build endurance and range the way it was originally intended.  For more advanced students suggest that they buy their own P.E.T.E. to keep in their instrument case.

Going to the Clinic is always an eye opener, but for me finding the jewel of the P.E.T.E (Personal Embouchure Training Exerciser) device was icing on the cake.  Students that would cry because they couldn’t get a good sound can suddenly see what they were doing wrong and begin to build the confidence and ability to be an active participant in my bands.  Every band director should consider adding it to their own bag of tools that they can call upon to help their students.  Kudos to Ken Titmus and Terry Warburton for coming up with this device.