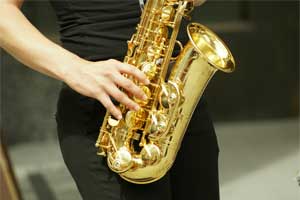 SmartMusic has yet another competitor in the intelligent assessment space with the introduction of the Weezic Augmented Sheet Music app for iPad. The app listens to you as you play and marks the notes correct or incorrect, all while keeping a running total of your score at the bottom of the page. It's a free app, but this very early release has a very limited number of songs available, and not all the instruments in a traditional wind ensemble (the poor trombones never get any love). Is Weezic worth the bits it takes to download? Read on to find out.

This initial version of the app ships with access to around 2 dozen songs on various instruments. The full version to be released later (see the press release)  will apparently have access to over a thousand songs. No definitive word if that version will be a single paid download or if new songs will be sold ala carte through a freemium arrangement. The songs shown on the app as demos all seem to be rather advanced in difficulty. This is not a practice app for beginners, at least not at this point, however for more advanced players there is some meat on the bone here. The pieces being demoed are significant pieces of literature, not cheaply done filler.

The playback system uses what sounds like standard MIDI voicings. Not the greatest sounds, but acceptable. Using several settings options you can have the app play the accompaniment part, the solo part, or neither of them. A metronome click can be activated for when you want to be assessed without any audio support at all. When playing by itself it apparently also listens to itself because after setting it running I realized it was giving itself green marks for every note. A minor detail to be sure, but if you are using it as an assessment tool in a classroom this little issue should be noted as the app does not seem to be able to record and store the audio from your personal performance.

One nice addition is the tuning adjustment which should allow you to switch the intonation of a piece to allow it to be played by almost any instrument. It would be nice if this was a feature that was easier to understand for non-teachers though. This would also open up a lot of additional songs for individual instruments to be able to play without having to deal with separate downloads.

As a demo Weezic is definitely something to take a closer look at. My final decision on whether to recommend the app will hinge on the titles in the full library, the instrumentation for those scores, and on the price tag associated with downloading individual titles. I think I would wind up having a problem with spending 99 cents for every piece of music I want to play, however if there are bundle deals made available or the ability to pay one price for full access I would be much happier with the arrangement. This all remains to be seen though, and for now the Weezic Augmented Sheet Music app is definitely one to take a closer look at.